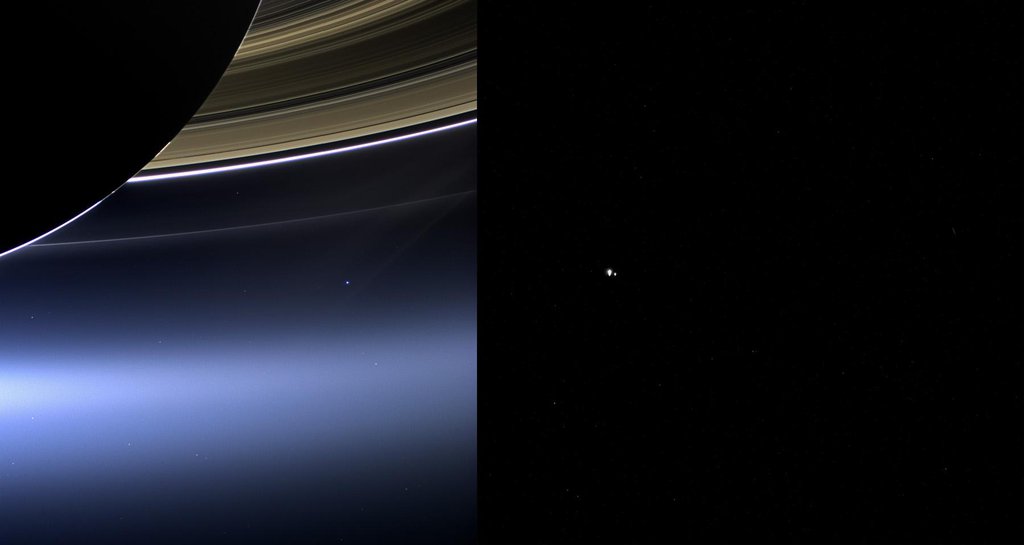 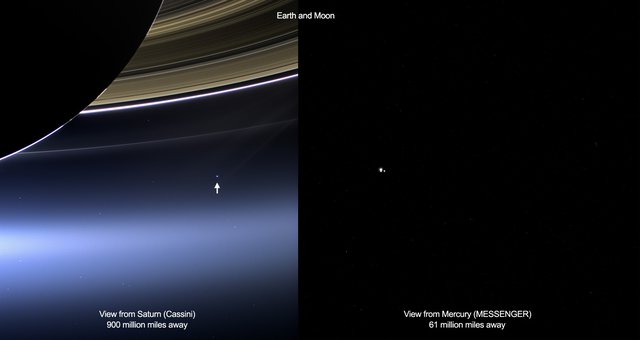 These images show views of Earth and the moon from NASA's Cassini (left) and MESSENGER spacecraft (right) from July 19, 2013.

In the Cassini image, the wide-angle camera has captured Saturn's rings and our planet Earth and its moon in the same frame. Earth, which is 898 million miles (1.44 billion kilometers) away in this image, appears as a blue dot at center right; the moon can be seen as a fainter protrusion off its right side. An arrow indicates their location in the annotated version. (More information about this image can be found at PIA17171). The other bright dots nearby are stars.

In the MESSENGER image, Earth and the moon appear as a pair of bright star-like features. MESSENGER was at a distance of 61 million miles (98 million kilometers) from Earth when it took this image with the wide-angle camera of the Mercury Dual Imaging System.

MESSENGER took this image as part of a campaign to search for natural satellites of Mercury. Earth and the moon appear very large in this picture because they are overexposed. When looking for potentially dim satellites, long exposures are required to capture as much light as possible. Consequently, bright objects in the field of view become saturated and appear artificially large. In fact, Earth and the moon are each less than a pixel in size, and no details on either can be seen.

The Cassini-Huygens mission is a cooperative project of NASA, the European Space Agency and the Italian Space Agency. The Cassini orbiter and its two onboard cameras were designed, developed and assembled at JPL. MESSENGER was designed and built by the Johns Hopkins University Applied Physics Laboratory (APL) in Laurel, Md. The mission is part of NASA's Discovery Program, managed for NASA's Science Mission Directorate in Washington by the agency's Marshall Space Flight Center in Huntsville, Ala. JPL and APL manage their respective missions for SMD.

For more information about the MESSENGER mission visit http://www.nasa.gov/messenger.