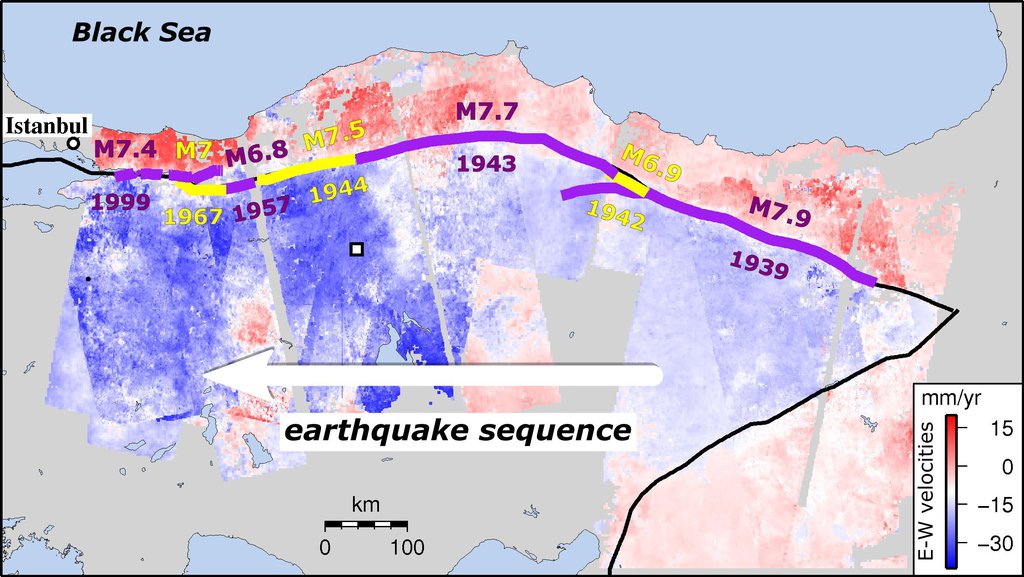 This image shows strain rates on the North Anatolian Fault in Turkey along the east-to-west sequence of earthquakes since 1939. New research shows that tectonic strain builds up along this fault -- one of the worlds most deadly earthquake zones -- at a remarkably steady rate. The finding means that present-day measurements not only reflect past strain accumulation, but also can provide vital information on the size of events still to come.

Strain builds up as Turkey is squeezed between three major tectonic plates. It has caused almost the entire length of the fault to rupture since 1939 in a series of major earthquakes migrating from east to west toward Istanbul. Past quakes are shown in the image in alternating purple and yellow lines, along with their magnitudes and dates.

Apart from the 10 years immediately after an earthquake, strain rates levelled out at about 0.5 microstrains per year, equivalent to a movement of 2 inches (50 millimeters) over a 60-mile (100-kilometer) region in a year, regardless of where or when the last earthquake took place.

The new study used satellite images from the European Space Agency's Envisat mission to identify tiny ground movements at earthquake locations along the fault. The 600-plus satellite images, taken between 2002 and 2010, provided insights into the equivalent of 250 years of the fault's earthquake repeat cycle.

Published in the journal Nature Communications, the study was led by Ekbal Hussain of the Centre for the Observation and Modelling of Earthquakes, Volcanoes and Tectonics (COMET) of the University of Leeds, U.K. David Bekaert of NASA's Jet Propulsion Laboratory in Pasadena, California, is a co-author.

Until the satellite era, it was difficult to get a clear picture of how strain built up on the fault. Now, satellites like Envisat, alongside the newer Sentinel-1 mission and in future the U.S./Indian NASA-ISRO Synthetic Aperture Radar (NISAR) mission, can detect ground movements of a few millimeters, indicating how and where strain is accumulating. However, several challenges remain in exploiting satellite data, including the noise caused by the signal travelling through the atmosphere. JPL's Bekaert helped address this challenge, having developed state-of-the-art techniques to reduce this noise source and to reveal the small ground movements this study was looking for.

The findings suggest that some hazard assessment models, which presume that strain rates vary over time, need to be rethought. This is especially true for regions where there are long gaps between earthquakes, such as the Himalayas.