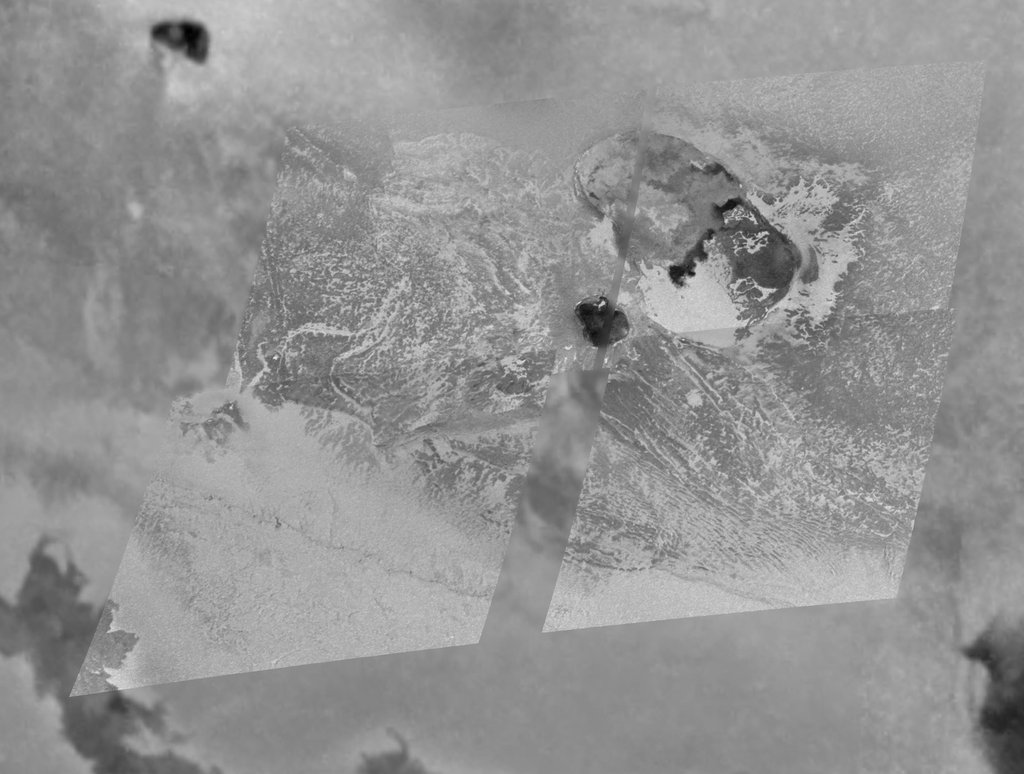 Images taken at different times and from different positions by NASA's Galileo spacecraft provide information about the three-dimensional structure of a large mountain named Tohil Mons on Jupiter's moon Io.

The first part of this image package is a mosaic combining detailed images that were taken a year ago by Galileo on Feb. 22, 2000, with a lower-resolution image of a wider area taken on June 30, 1999. The sharper portion has a resolution of 165 meters (540 feet) per picture element. The lower-resolution context image is at 1.3 kilometers (0.8 mile) per picture element. North is to the top of the image. The Sun was almost directly behind the spacecraft, so shadows aren't visible.

Because topography is difficult to distinguish on Io unless the Sun is low enough to cast shadows, the second part of this release is a stereo image of Tohil Mons that was created from two mosaics acquired on Oct.11, 1999, and Feb. 22, 2000. When viewed with red-blue glasses, it illustrates the three-dimensional shape of the mountain and two nearby volcanic depressions, which are called paterae. The largest patera lies along the northeastern margin of the mountain. The stereo observation reveals that the smaller patera with the dark floor is surrounded by mountainous walls. The black lines are areas where data were not acquired.

To the southeast of the peak, many bright lines trending northwest-southeast can be seen. Since the two individual images were taken when the Sun was quite high, it was difficult to determine the relationship between the bright material and the topography. The stereo image reveals that the light material is concentrated at the bases of cliffs. This series of cliffs appears step-like, which may indicate layering in Io's crust.

Two additional figures describing the three-dimensional shape of the Tohil Mons region are also included. The first of these is a topographic representation of what Tohil Mons looks like when seen from the northeast. The topography has been vertically exaggerated. The peak's height is about 5.4 kilometers, plus or minus 1.1 kilometer (about 18,000 feet, give or take 3,600 feet).

The second figure shows two views in which Tohil Mons has been outlined in red. The top image was taken at low resolution and a low Sun angle during Galileo's third orbit, in 1996. Because the Sun is low, topographic features on the mountain can be recognized from the shadows they cast. The two paterae and the peak of the mountain are labeled. The bottom image was taken on Feb. 22, 2000, at higher resolution and a higher Sun angle. The topography is almost indistinguishable, but many more details can be discerned. By combining several observations in this manner, Galileo scientists are able to study Io's mountains and to learn about their evolution and their relationship to Io's volcanoes.