The Valhalla Multi-ring Structure on Callisto 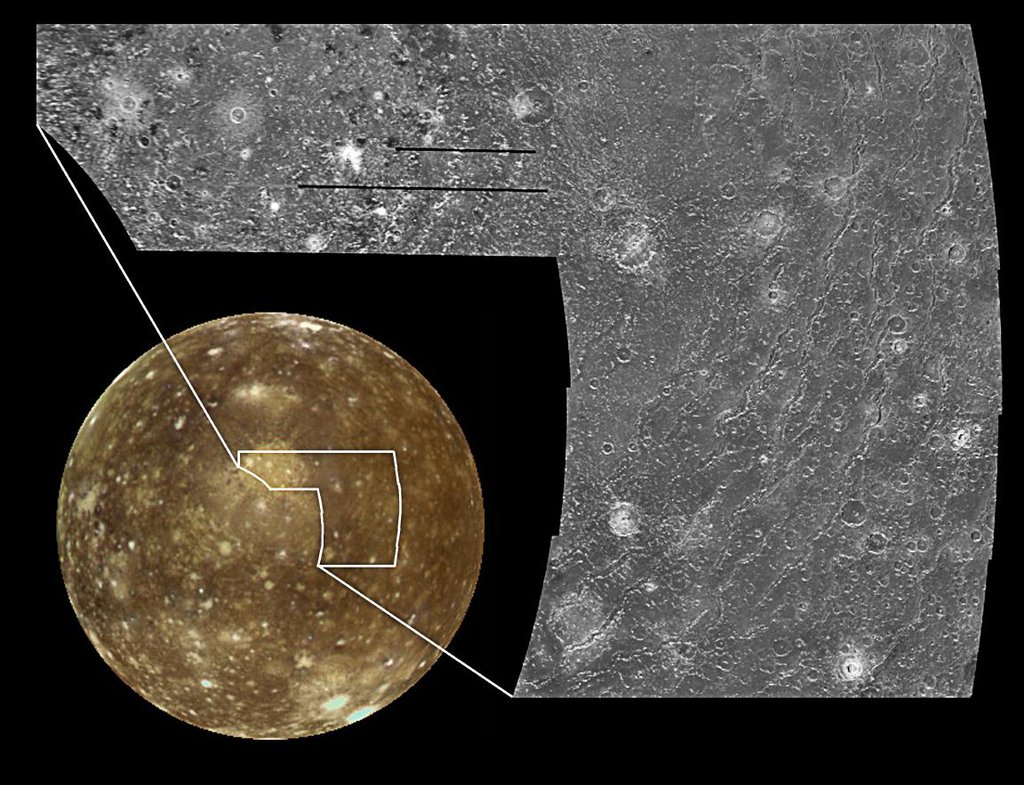 These images of Callisto, the outermost of the Galilean satellites of Jupiter, reveal a surface characterized by impact craters. The global view (lower left) is dominated by a large bulls-eye feature, the Valhalla multi-ring structure, consisting of a bright inner region about 600 kilometers (370 miles) across. Valhalla's 4,000 kilometer (2,500 mile) diameter make it one of the largest impact features in the solar system. Callisto is 4,800 kilometers (3,000 miles) in diameter. In this global view, the sun illuminates the surface from near the center, in the same way a full moon is seen from Earth when illuminated by the sun.

The image on the right shows part of Valhalla at moderate resolution. At this resolution, the surface is appears to be somewhat smooth, with a lack of numerous small impact craters. Valhalla's outer rings are clearly seen to consist of troughs which could be fractures in the crust which resulted from the impact. The bright central plains possibly were created by the excavation and ejection of "cleaner" ice or liquid water from beneath the surface, with a fluid-like massfilling the crater bowl after impact.

North is to the top of the picture. For the moderate resolution view on the right, the sun illuminates the surface from the left and the resolution is approximately 400 meters per picture element. The images were obtained on June 25, 1997 by the solid state imaging (SSI) system on NASA's Galileo spacecraft at a range of about 40,000 kilometers (25,000 miles) from Callisto during Galileo's ninth orbit of Jupiter. The global image on the left is centered at 0.5 degrees south latitude and 56 degrees longitude. The resolution is 14 kilometers per picture element. The images were obtained on November 5, 1997 at a range of 68,400 kilometers (42,400 miles) during Galileo's eleventh orbit of Jupiter.