The Two Faces of Janus 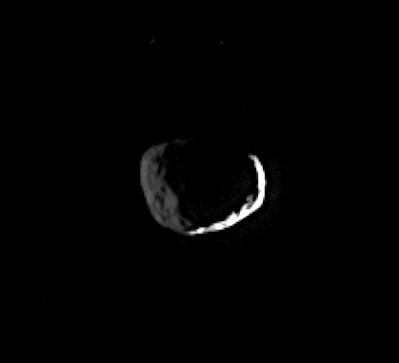 The Roman god Janus is usually depicted with two faces, one looking forward and one behind. Janus is captured here by Cassini, showing two faces of its own.

This view shows a sliver of Janus's dayside, plus much of the dark side. Part of the darkened terrain to the left is lit dimly by reflected light from Saturn, revealing craters there.

The image was taken in visible green light with the Cassini spacecraft narrow-angle camera on Aug. 2, 2005, at a distance of approximately 541,000 kilometers (336,000 miles) from Janus and at a Sun-Janus-spacecraft, or phase, angle of 147 degrees. Resolution in the original image was 3 kilometers (2 miles) per pixel. The image has been contrast-enhanced and magnified by a factor of two to aid visibility.

The Cassini-Huygens mission is a cooperative project of NASA, the European Space Agency and the Italian Space Agency. The Jet Propulsion Laboratory, a division of the California Institute of Technology in Pasadena, manages the mission for NASA's Science Mission Directorate, Washington, D.C. The Cassini orbiter was designed, developed and assembled at JPL.