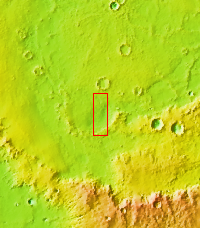 All this week, the THEMIS Image of the Day has been following on the real Mars the path taken by fictional astronaut Mark Watney, stranded on the Red Planet in the book and movie, The Martian.

Generally smooth and rolling terrain covers most of this portion of Schiaparelli Crater's floor. Because the impact that made Schiaparelli occurred billions of years ago, nature has had ample time to leave lava and sediments in the crater and to erode them. The ridge in the image's southern end is part of an eroded crater rim, one of many such smaller impact craters that have collected on Schiaparelli's floor since it formed. (This image was taken as part of a study for the Mars Student Imaging Project by a high-school science class.)

Here astronaut Mark Watney's great overland trek reaches its end. He arrives safely at the Mars Ascent Vehicle (MAV), which was sent in advance for the next Mars mission crew. The rocket will get him off the ground and into Mars orbit, where he can be picked up by a rescue ship coming from Earth.