The Mars 2020 Spacecraft Readies for Testing 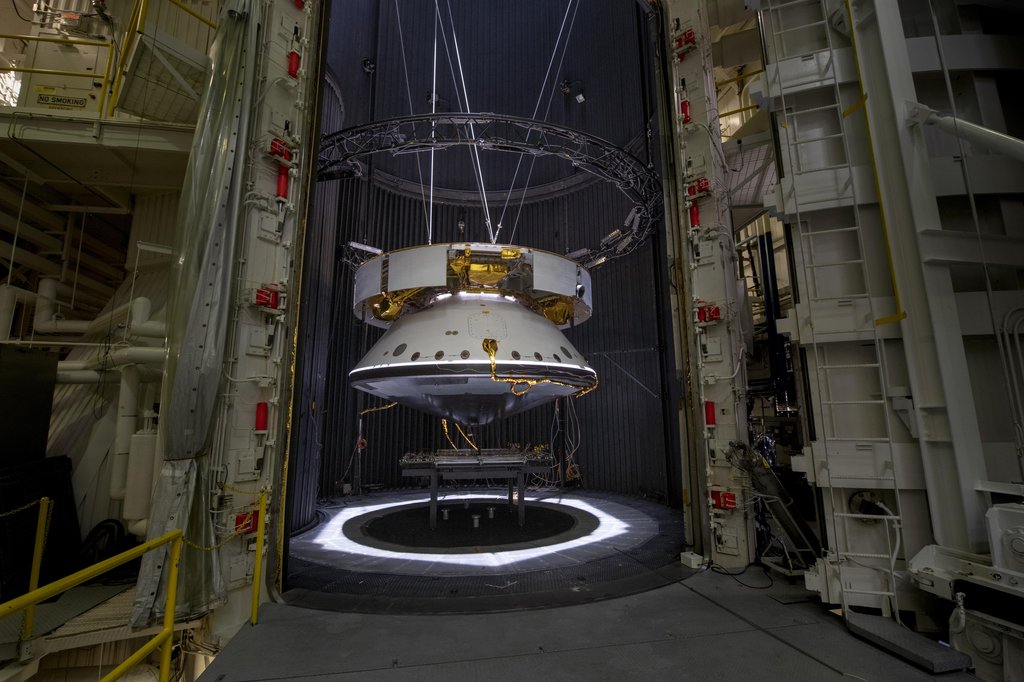 The completed spacecraft that will carry NASA's next Mars rover to the Red Planet is suspended by cables as it is prepared for thermal vacuum (TVAC) testing in the Space Simulator Facility at NASA's Jet Propulsion Laboratory in Pasadena, California.

From the top down is the complete cruise stage, which will power and guide the Mars 2020 spacecraft on its seven-month voyage to the Red Planet. Directly below that is the aeroshell (white back shell and barely visible black heat shield), which will protect the vehicle during cruise as well as during its fiery descent into the Martian atmosphere. Not visible (because it's cocooned inside the aeroshell) is the completed rocket-powered descent stage and the surrogate rover (a stand-in for the real rover, which is undergoing final assembly in JPL's High Bay 1 cleanroom).

The Mars 2020 spacecraft was tested in the 25-foot-wide, 85-foot-tall (8-meter-by-26-meter) vacuum chamber in the same configuration it will be in while flying through interplanetary space. The 2020 rover carries an entirely new suite of instruments, including a sample-caching system that will collect samples of Mars for return to Earth on subsequent missions. The mission will launch from Cape Canaveral Air Force Station in Florida in July of 2020 and land at Jezero Crater on Feb. 18, 2021.