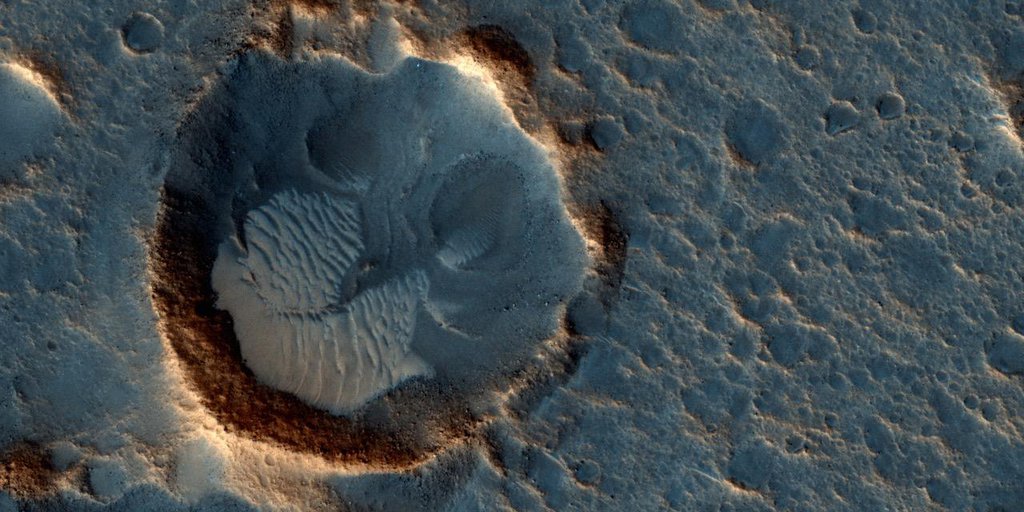 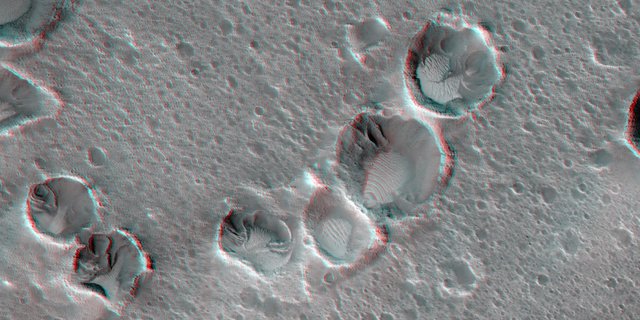 This image from the High Resolution Imaging Science Experiment (HiRISE) camera on NASA's Mars Reconnaissance Orbiter shows a location on Mars associated with the best-selling novel and Hollywood movie, "The Martian."

This area is in the Acidalia Planitia region. In the novel and the movie, it is the landing site of a crewed mission named Ares 3. For the story's central character, Acidalia Planitia is within driving distance from where NASA's Mars Pathfinder, with its Sojourner rover, landed in 1997.

An initial HiRISE image of the site was taken in April 2015 and is online at http://hirise.lpl.arizona.edu/ESP_040776_2115. A second one was taken May 17, 2015, and is shown here. Figure 1 is a stereo combination of the two, appearing three-dimensional when viewed through blue-red glasses with the red lens on the left

One of the main objectives of the HiRISE camera is to carry out "monitoring science", which involves taking images of certain areas of high scientific interest on regular intervals. The team usually does so to monitor a seasonal or recurring process such as seasonal changes in carbon-dioxide ice near the poles, dune movement or recurring flow-like features on some slopes. HiRISE also takes repeated images of areas with active rovers, such as Curiosity, to help plan safe routes toward areas of high scientific interest.

Another key responsibility for the HiRISE camera is to provide information for use in selection of landing sites for future missions. One technique is to image a site of interest at least twice when the weather conditions are similar, but with a small difference in viewing angle, much like what you would experience if you looked at something with only your right eye, then looked at it again with the left. By doing this, we are able to build a stereo view of the site, providing a chance to identify high and low points in the site more effectively. This resulting 3-D information can combined with elevation data from laser altimeters to create a highly accurate "digital terrain model" or DTM for short.

DTMs allow researchers to view the locations in 3-D and to analyze them by measuring the exact height of features that could be hazardous to the future mission, such as large boulders or small impact craters. DTMs from HiRISE were a key factor in choosing the landing site for NASA's Curiosity Mars rover in Gale Crater and are being used to evaluate sites under consideration for the NASA's 2016 InSight Mars lander and Mars 2020 rover missions.

The location of the site in this image is 31.3 degrees north latitude, 331.3 degrees east latitude. The image is an excerpt from HiRISE observation ESP_041277_2115.