The Answer is Blowing in the Black Hole Wind 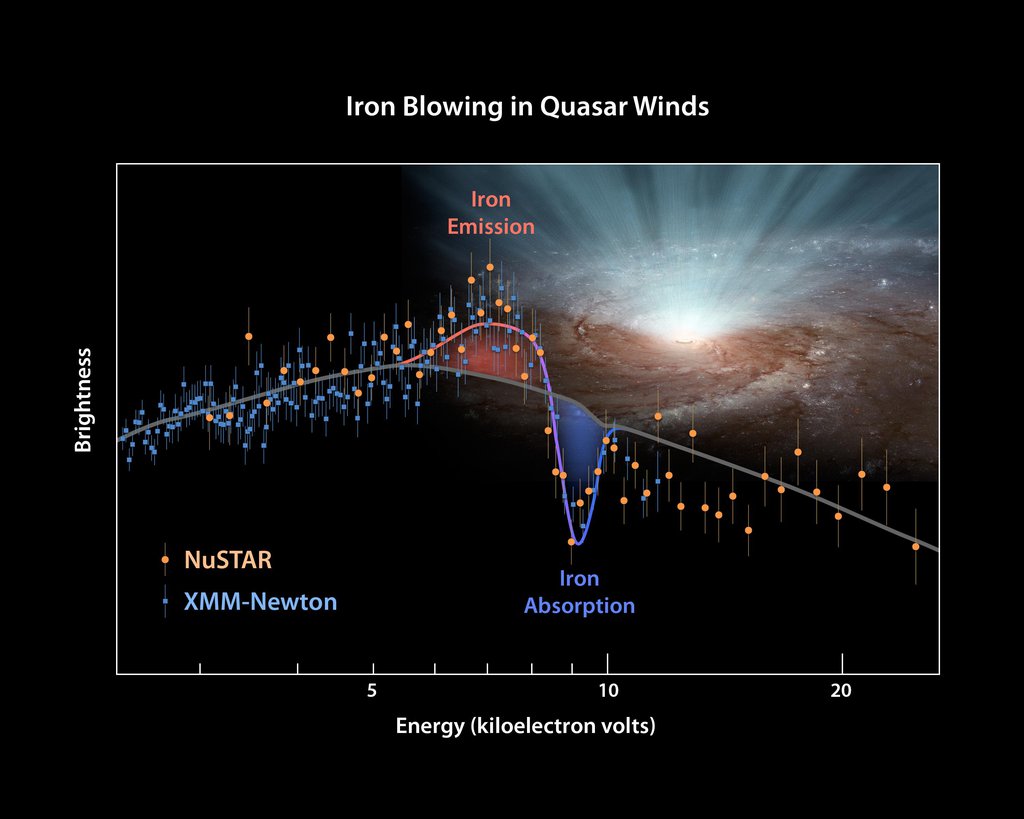 This plot of data from two space telescopes, NASA's Nuclear Spectroscopic Telescope Array (NuSTAR) and the European Space Agency's (ESA's) XMM-Newton determines for the first time the shape of ultra-fast winds from supermassive black holes, or quasars. The winds blow in every direction, in a nearly spherical fashion, coming from both sides of a galaxy (only one side is shown here).

The plot shows the brightness of X-ray light from an extremely luminous quasar called PDS 456, with the highest-energy rays on the right. XMM-Newton sees lower-energy X-rays, and NuSTAR, higher. XMM Newton had previously observed the extremely luminous quasar, called PDS 456, on its own in 2001. At that time, it had measured the X-rays up to an energy level of 11 kiloelectron volts. From those data, researchers detected a dip in the X-ray light, called an absorption feature (see dip in plot). The dip is caused by iron atoms -- which are carried by the winds along with other matter -- absorbing the X-ray light of a particular energy. What's more, the absorption feature is 'blueshifted," meaning that the winds are speeding toward us (like a train's whistle shifting to higher frequencies as it races toward you).

In other words, the 2001 XMM-Newton data had told researchers that at least some of the winds were blowing toward us -- but they didn't reveal whether those winds were confined to a narrow beam along our line of sight, or were blowing in all directions. That's because XMM-Newton had only detected absorption features, which by definition occur in front of a light source, in this case, the quasar. To probe what was happening to at sides of the quasar, the astronomers needed to find a different type of feature called an emission feature. These occur when iron scatters X-ray light at a particular energy in all directions, not only toward the observer.

Enter NuSTAR to the X-ray astronomy scene, a high-energy X-ray telescope that was launched in 2012. NuSTAR and XMM-Newton teamed up to observe PDS 456 simultaneously in 2013 and 2014. The results are shown in this plot. NuSTAR data are represented as orange circles and XMM-Newton as blue squares. The NuSTAR data reveal the baseline of the "continuum" quasar light (see gray line) -- or what the quasar would look like without any winds. What stands out is the bump to the left of the dips. That's an iron emission signature, the telltale sign that the black hole winds blow to the sides and in all directions.

XMM-Newton might have seen the emission feature before, but the feature couldn't be identified until NuSTAR's elucidated the baseline quasar light. For example, had the X-ray winds been confined to a beam, then NuSTAR would have seen more brightness at the higher end of the X-ray spectrum, and there would have been no iron emission feature.

The results demonstrate that, in some cases, two telescopes are better than one at solving tricky problems. By observing the entire X-ray energy range, the astronomers were able to get a more complete picture of what is happening around the quasar.