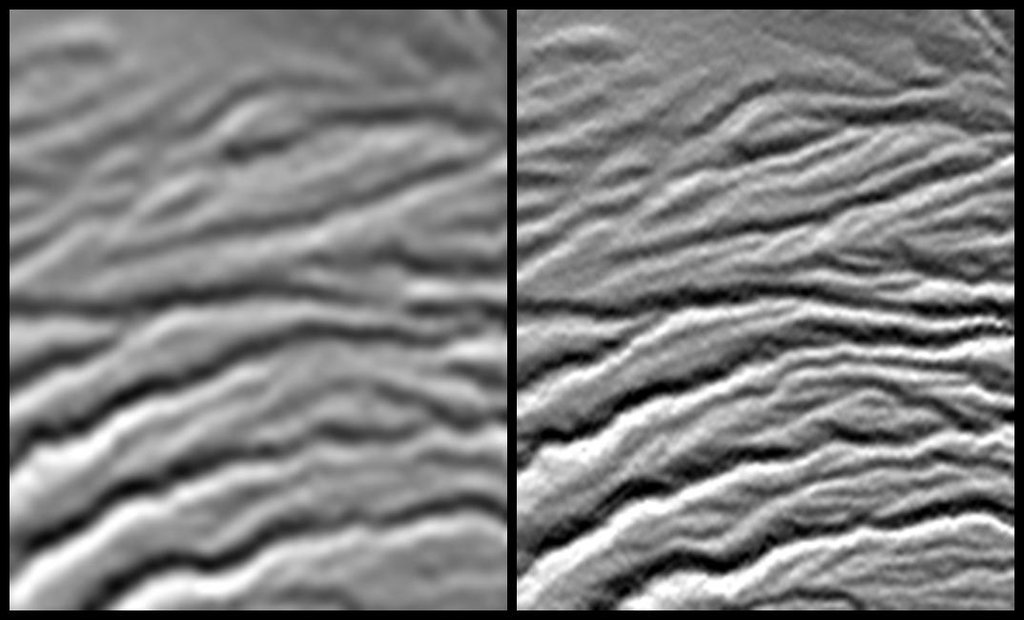 A site in the Crater Highlands of Tanzania reveals the difference between Shuttle Radar Topography Mission (SRTM) digital elevation model (DEM) data as originally released in 2004 (left) and as now released at full resolution in 2014 (right). For geographic context, this site is located at almost the exact center of JPL Photojournal image PIA06669. The images here depict artificial shading of the DEM, with illumination shining southward from the top of the images (north is at the top of the images). The landforms observed are stream channels that are eroded on the eastern flank of a volcano. Rainfall thus produces water runoff that flows eastward (toward the right) in these channels.

Note that small stream channels are discernible only in the 30-meter data and larger stream channels are much more clearly characterized by the 30-meter data. Stream channel patterns control water supply and stream-related natural hazards, such as flash floods. The newly released data can improve the study of such concerns here and elsewhere around the world. SRTM elevation data are also used in nearly every scientific discipline concerned with the environment near Earth's surface, as well as in many civil applications, such as land use planning. The improved resolution will be beneficial in all of these uses.

Elevation data used in this image were acquired by the Shuttle Radar Topography Mission (SRTM) aboard the Space Shuttle Endeavour, launched on February 11, 2000. The mission was a cooperative project between the National Aeronautics and Space Administration (NASA), the National Geospatial-Intelligence Agency (NGA) of the U.S. Department of Defense (DoD), and the German and Italian space agencies. It was managed by NASA's Jet Propulsion Laboratory, Pasadena, California, for NASA's Science Mission Directorate, Washington, D.C.