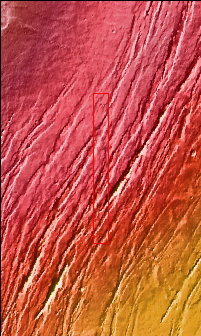 Tantalus Fossae is a set of long valleys on the eastern side of Alba Patera. These valleys are referred to as graben and are formed by extension of the crust and faulting. When large amounts of pressure or tension are applied to rocks on timescales that are fast enough that the rock cannot respond by deforming, the rock breaks along faults. In the case of a graben, two parallel faults are formed by extension of the crust and the rock in between the faults drops downward into the space created by the extension. Numerous sets of graben are visible in this THEMIS image, trending from north-northeast to south-southwest. Because the faults defining the graben are formed parallel to the direction of the applied stress, we know that extensional forces were pulling the crust apart in the west-northwest/east-southeast direction. The large number of graben around Alba Patera is generally believed to be the result of extensional forces associated with the uplift of Alba Patera.