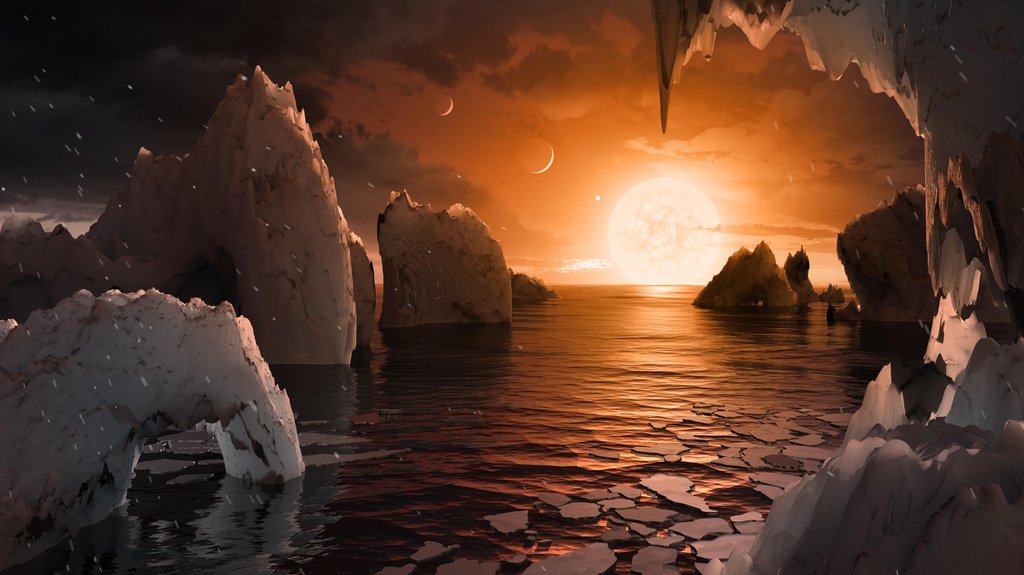 This artist's concept allows us to imagine what it would be like to stand on the surface of the exoplanet TRAPPIST-1f, located in the TRAPPIST-1 system in the constellation Aquarius.

Because this planet is thought to be tidally locked to its star, meaning the same face of the planet is always pointed at the star, there would be a region called the terminator that perpetually divides day and night. If the night side is icy, the day side might give way to liquid water in the area where sufficient starlight hits the surface.

One of the unusual features of TRAPPIST-1 planets is how close they are to each other -- so close that other planets could be visible in the sky from the surface of each one. In this view, the planets in the sky correspond to TRAPPIST1e (top left crescent), d (middle crescent) and c (bright dot to the lower right of the crescents). TRAPPIST-1e would appear about the same size as the moon and TRAPPIST1-c is on the far side of the star. The star itself, an ultra-cool dwarf, would appear about three times larger than our own sun does in Earth's skies.

The TRAPPIST-1 system has been revealed through observations from NASA's Spitzer Space Telescope and the ground-based TRAPPIST (TRAnsiting Planets and PlanetesImals Small Telescope) telescope, as well as other ground-based observatories. The system was named for the TRAPPIST telescope.