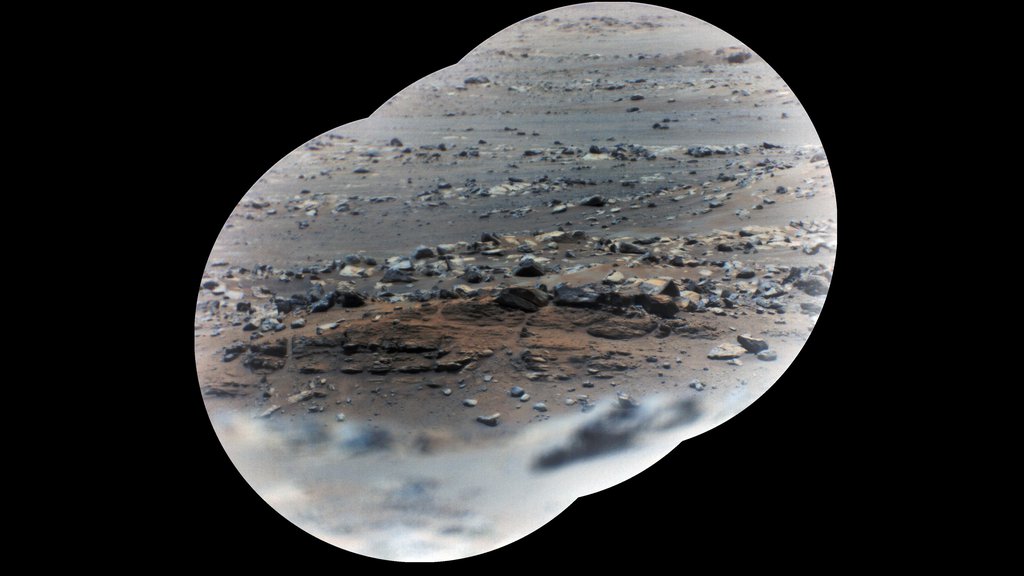 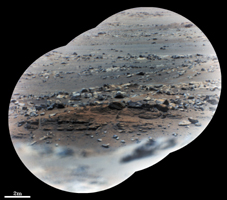 NASA's Perseverance rover took these zoomed-in images of a layered outcrop (just below center of image) nicknamed "Artuby" on June 17, 2021 (the 116th sol, or Martian Day, of its mission), from a little more than a third of a mile (615 meters) away. This mosaic is made up of three images taken by the Remote Microscopic Imager (RMI), part of the rover's SuperCam instrument. Each circular image has a field of view of 37.73 feet (11.50 meters) at this distance. The images were combined using an algorithm that weights the image centers.

The outcrop shows evidence of being formed in an ancient lake. The feature is in the 'Verdon' quadrangle of Mars' Jezero Crater, south of the landing site. Artuby is the name of a river in southern France.

One version (Figure 1) uses a Gaussian color stretch to make it easier to see differences among the colors. Another version (Figure 2) shows natural color, simulating the approximate view that we would see with our own eyes if we were on Mars.

SuperCam is led by Los Alamos National Laboratory in New Mexico, where the instrument's Body Unit was developed. That part of the instrument includes several spectrometers as well as control electronics and software.

The Mast Unit, including the RMI used for these images, was developed and built by several laboratories of the CNRS (the French research center) and French universities under the contracting authority of Centre National d'Etudes Spatiales (CNES, the French space agency).