Springtime on Mars: Hubble's Best View of the Red Planet 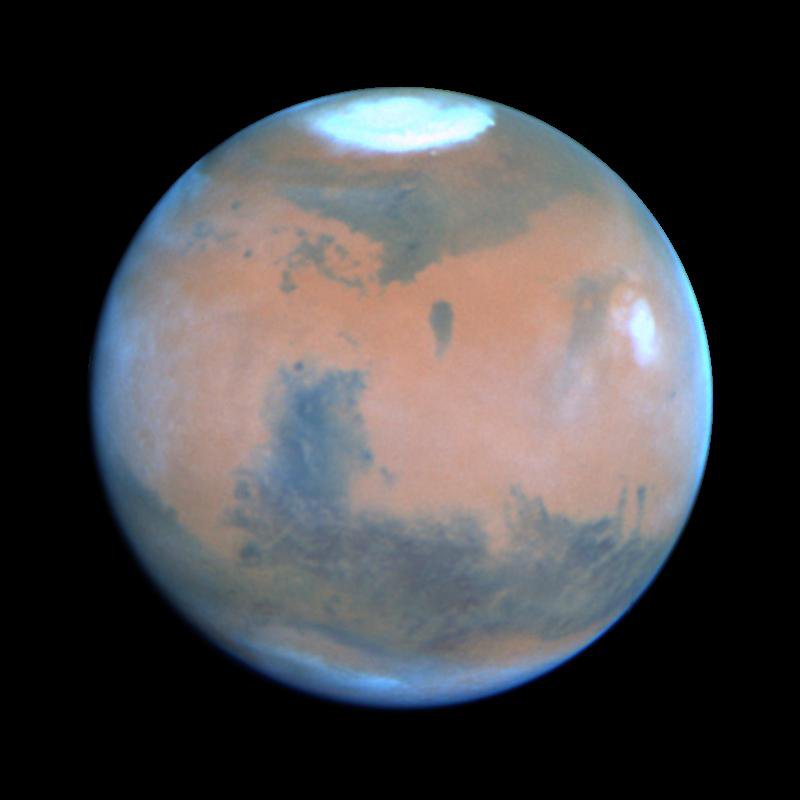 This NASA Hubble Space Telescope view of the planet Mars was, at the time it was taken, the clearest picture ever taken from Earth, surpassed only by close-up shots sent back by visiting space probes. The picture was taken on February 25, 1995, when Mars was at a distance of approximately 65 million miles (103 million km) from Earth.

Because it is spring in Mars' northern hemisphere, much of the carbon dioxide frost around the permanent water-ice cap has sublimated, and the cap has receded to a core of solid water-ice several hundred miles across.

Towering 16 miles (25 km) above the surrounding plains, volcano Ascraeus Mons pokes above the cloud deck near the western or limb. This extinct volcano, measuring 250 miles (402 km) across, was discovered in the early 1970s by Mariner 9 spacecraft. Other key geologic features include (lower left) the Valles Marineris, an immense rift valley the length of the continental United States. Near the center of the disk lies the Chryse basin made up of cratered and chaotic terrain. The oval-looking Argyre impact basin (bottom), appears white due to clouds or frost.

Seasonal winds carry dust to form striking linear features reminiscent of the legendary martian "canals." Many of these "wind streaks" emanate from the bowl of these craters where dark coarse sand is swept out by winds. Hubble resolves several dozen impact craters down to 30-mile diameter. The dark areas, once misinterpreted as regions of vegetation by several early Mars watchers, are really areas of coarse sand that is less reflective than the finer, lighter dust. Seasonal changes in the surface appearance occur as winds move the dust and sand around.

This picture was taken with Hubble's Wide Field Planetary Camera 2 in PC mode. The pictures were map-projected onto a sphere for accurate registration and perspective.