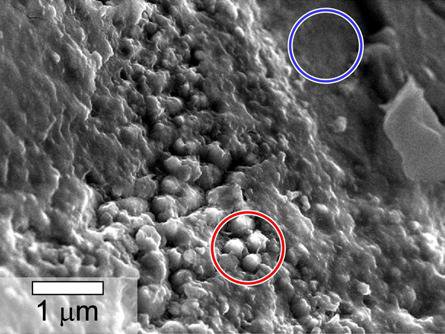 This scanning electron microscope image shows spheroidal features embedded in a layer of iddingsite, a mineral formed by action of water, in a meteorite that came from Mars. An area with the spheres, circled in red, was found to have about twice as much carbon present as an area (circled in blue) without the spheres. This meteorite, named Yamato 000593, was found in Antarctica in 2000 and identified as originating from Mars. The scale bar at lower left is 1 micron.