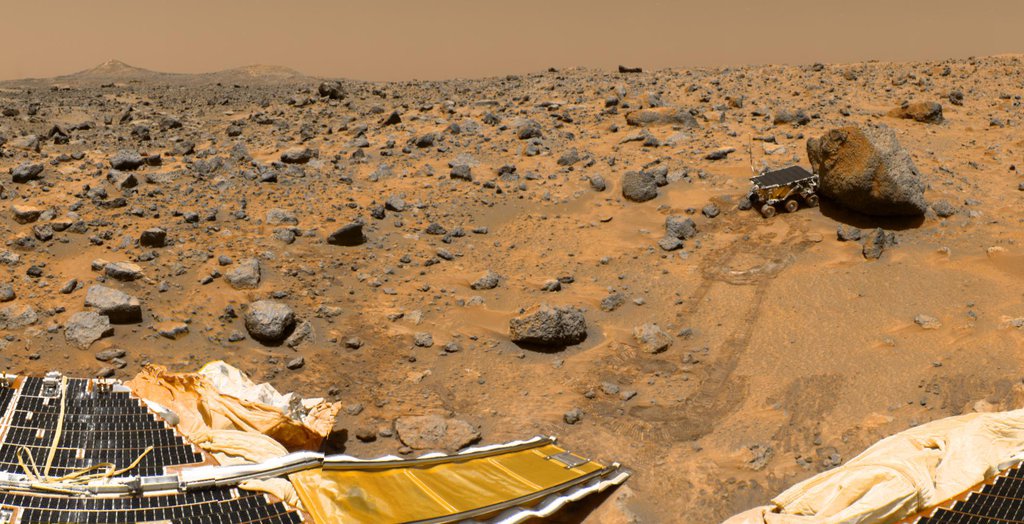 This is a sub-section of the "geometrically improved, color enhanced" version of the 360-degree panorama heretofore known as the "Gallery Pan," the first contiguous, uniform panorama taken by the Imager for Mars Pathfinder (IMP) over the course of Sols 8, 9, and 10. Different regions were imaged at different times over the three Martian days to acquire consistent lighting and shadow conditions for all areas of the panorama.

The IMP is a stereo imaging system that, in its fully deployed configuration, stands 1.8 meters above the Martian surface, and has a resolution of two millimeters at a range of two meters. In this geometrically improved version of the panorama, distortion due to a 2.5 degree tilt in the IMP camera mast has been removed, effectively flattening the horizon.

The IMP has color capability provided by 24 selectable filters -- twelve filters per "eye." Its red, green, and blue filters were used to take this image. The color was digitally balanced according to the color transmittance capability of a high-resolution TV at the Jet Propulsion Laboratory (JPL), and is dependent on that device. In this color enhanced version of the panorama, detail in surface features are brought out via changes to saturation and intensity, holding the original hue constant. A threshold was applied to avoid changes to the sky.

On the horizon the double "Twin Peaks" are visible, about 1- 2 kilometers away. The rock "Couch" is the dark, curved rock at right of Twin Peaks. A Lander petal is visible on the left, showing the fully deployed rear ramp, which rover Sojourner used to descend to the surface of Mars on July 5. Immediately to the left of the rear ramp is the rock "Barnacle Bill," which scientists found to be andesitic, possibly indicating that it is a volcanic rock (a true andesite) or a physical mixture of particles. Just beyond Barnacle Bill, rover tracks lead to Sojourner, shown using its Alpha Proton X-Ray Spectrometer (APXS) instrument to study the large rock "Yogi." Yogi, low in quartz content, appears to be more primitive than Barnacle Bill, and appears more like the common basalts found on Earth.

The tracks and circular pattern in the soil leading up to Yogi were part of Sojourner's soil mechanics experiments, in which varying amounts of pressure were applied to the wheels in order to determine physical properties of the soil. During its traverse to Yogi the rover stirred the soil and exposed material from several centimeters in depth. During one of the turns to deploy Sojourner's Alpha Proton X-Ray Spectrometer, the wheels dug particularly deeply and exposed white material. Spectra of this white material show it is virtually identical to the rock "Scooby Doo," and such white material may underlie much of the site. Deflated airbags are visible at the perimeter of the Lander petals.