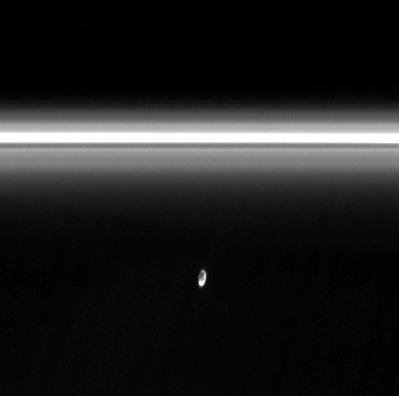 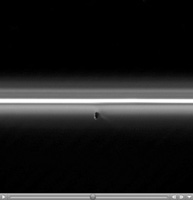 Click on the image for movie of
Soft Collision

The moon Prometheus slowly collides with the diffuse inner edge of Saturn's F ring in this movie sequence of Cassini images. The oblong moon pulls a streamer of material from the ring and leaves behind a dark channel.

Once during its 14.7-hour orbit of Saturn, Prometheus (102 kilometers, or 63 miles across) reaches the point in its elliptical path, called apoapse, where it is farthest away from Saturn and closest to the F ring. At this point, Prometheus' gravity is just strong enough to draw a "streamer" of material out of the core region of the F ring.

Initially the dust-sized material drawn away from the ring appears to form a streamer pointing ahead of Prometheus in its orbit. (All orbital motion is towards the right in the movie.) Over time, the streamer falls increasingly farther behind Prometheus because material in the F ring is orbiting slower than the moon. The streamer gets longer and a darker "channel" starts to be seen (to the left of the streamer in the movie).

The creation of such streamers and channels occurs in a cycle that repeats each Prometheus orbit: when Prometheus again reaches apoapse, it draws another streamer of material from the F ring. But since Prometheus orbits faster than the material in the ring, this new streamer is pulled from a different location in the ring about 3.2 degrees (in longitude) ahead of the previous one.

The movie shows just under half of a complete streamer-channel cycle. The dark frames in the movie represent the period during which Prometheus and the F ring pass through Saturn's shadow.

The images in the movie were acquired by the Cassini spacecraft narrow-angle camera on Nov. 23 and 24, 2006. The movie sequence consists of 72 clear spectral filter images taken every 10.5 minutes over a period of about 12.5 hours.

The original images were cropped to show only the region around Prometheus and the nearby portion of the F ring. The movie covers the region between 138,000 and 142,000 kilometers (86,000 and 88,000 miles) radially from Saturn and 1 degree in longitude from Prometheus on each side. Each frame was reprojected such that the vertical axis represents distance from Saturn and the horizontal axis represents longitude around Saturn. Image scale is 10 kilometers (6 miles) per pixel in the vertical direction; the images cover 0.005 degrees of longitude in the horizontal direction. Because of the reprojection, the F ring appears straight, rather than slightly curved, as it otherwise would.

Since the F ring has an elliptical shape, its radial distance from Saturn varies by about 1,000 kilometers (620 miles) around the ring. This accounts for the apparent vertical movement of the ring over the course of the movie. Only a very small part of the ring appears in each of the reprojected frames, so the difference in the ring's radial distance from left to right across any single frame is small enough as to be effectively unnoticeable.