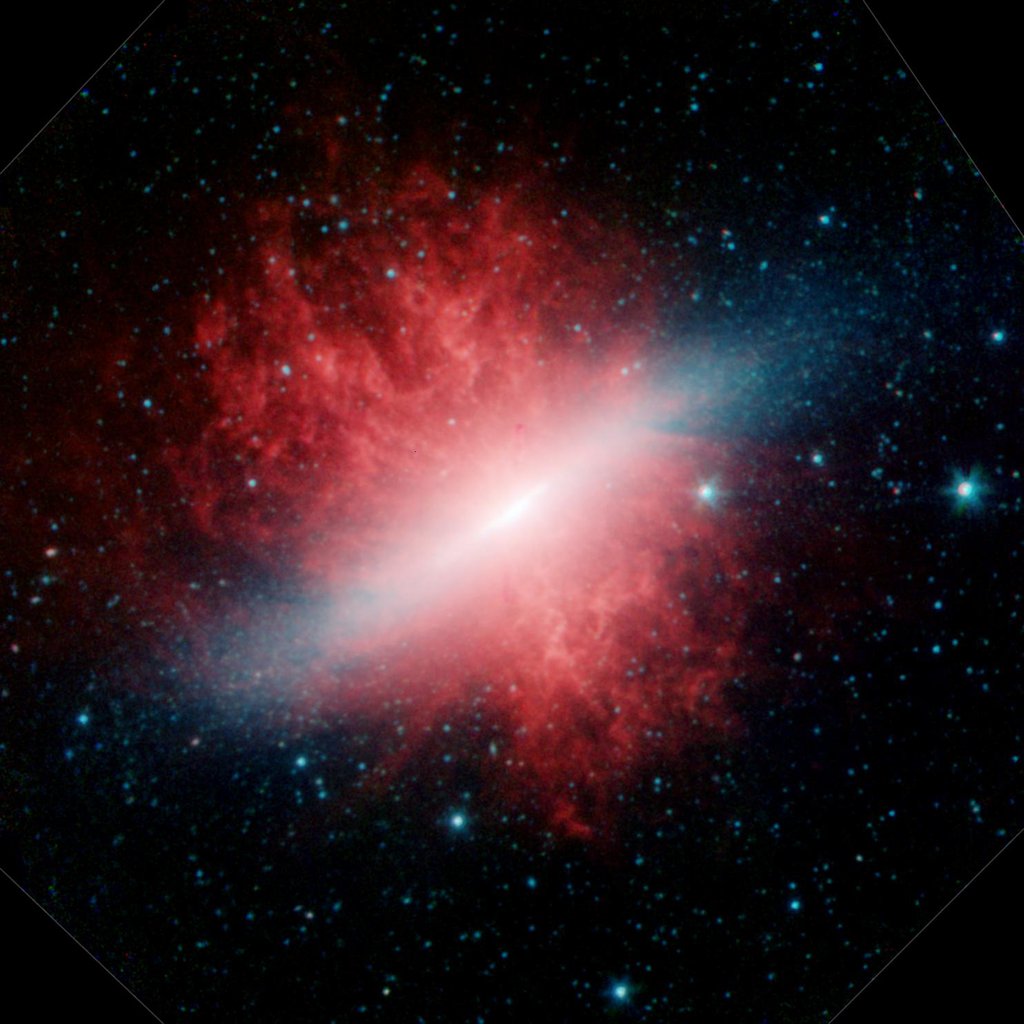 This infrared image from NASA's Spitzer Space Telescope shows a galaxy that appears to be sizzling hot, with huge plumes of smoke swirling around it. The galaxy, known as Messier 82 or the "Cigar galaxy," is in fact, smothered in smoky dust particles (red) blown out into space by the galaxy's hot stars (blue).

The visible-light picture of Messier 82, shows only a bar of light against a dark patch of space. Longer exposures of the galaxy (not pictured here) have revealed cone-shaped clouds of hot gas above and below the galaxy's plane. It took Spitzer's three sensitive instruments to show that the galaxy is also surrounded by a huge, hidden halo of smoky dust (red in infrared image).

Of those instruments, Spitzer's infrared spectrograph told astronomers that the dust contains a carbon-containing compound, called polycyclic aromatic hydrocarbon. This smoky molecule can be found on Earth in tailpipes, barbecue pits and other places where combustion reactions have occurred.

The image composite compares a visible-light view (left) of the "Cigar galaxy" to an infrared view from NASA's Spitzer Space Telescope of the same galaxy. The movie "Cigar Galaxy up in Smoke" begins with the visible image of the galaxy looking cool as a cucumber, then fades into the infrared image, revealing a smokin' hot "cigar."

Messier 82 is located about 12 million light-years away in the Ursa Major constellation. It is viewed from its side, or edge on, so it appears as a thin cigar-shaped bar. The galaxy is termed a starburst because its shrouded core is a fiery hotbed of stellar birth. A larger nearby galaxy, called Messier 81, is gravitationally interacting with Messier 82, prodding it into producing the new stars.

This picture was taken by Spitzer's infrared array camera as a part of the Spitzer Infrared Nearby Galaxy Survey. Blue indicates infrared light of 3.6 microns, green corresponds to 4.5 microns, and red to 5.8 and 8.0 microns. The contribution from starlight (measured at 3.6 microns) has been subtracted from the 5.8- and 8-micron images to enhance the visibility of the dust features.

The visible-light picture is from the National Optical Astronomy Observatory, Tucson, Ariz.