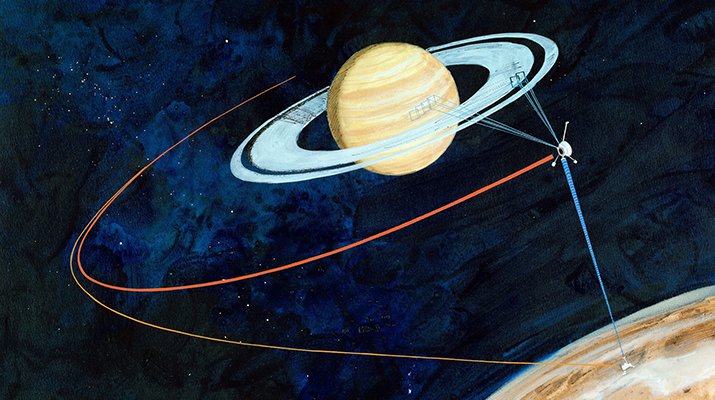 In the 1970s and 80s, before advanced computer graphics, artist Ken Hodges was hired by JPL to create paintings that depicted many different missions – some in the planning stages and some only imagined.

Bruce Murray became JPL's Director in 1976, and he advocated new missions (Purple Pigeons) that would have enough pizzazz to attract public and scientific support.  Hodges painted many of the Purple Pigeon images, including this scene of a Saturn orbiter with a lander going to the surface of Saturn's largest moon Titan.  This artwork was done almost 30 years before Cassini's Huygens Probe reached the surface of Titan.  Cassini was launched in 1997 and spent seven years traveling to Saturn. The probe was released in December 2004, and landed on Titan on January 14, 2005.

For more information about the history of JPL, contact the JPL Archives for assistance. [Archival and other sources: P-numbered photo albums and indexes, Cassini and Huygens web pages.]