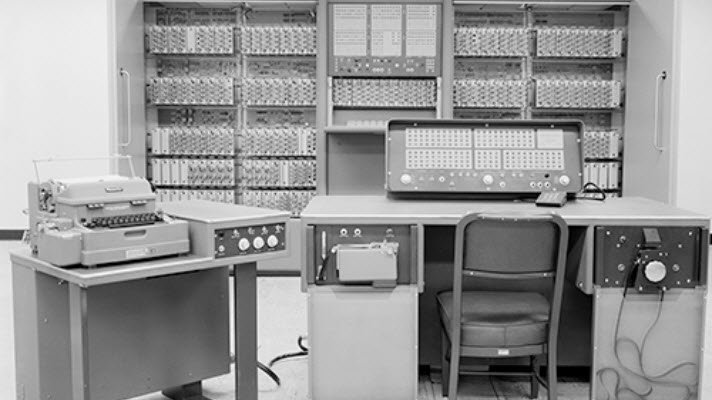 In January 1953, JPL was in the market for its first digital computer.

After investigating the possibilities, a site visit was made to Consolidated Engineering Corporation (CEC) in Pasadena and the CEC Model 30-203 digital computer, shown in this photo, was eventually selected. The prototype at CEC was given the project number 36-101. JPL and the National Bureau of Standards were the first two customers to order the computer – the one ordered by JPL was 36-102, and the one for NBS was 36-103.

JPL's computer was finally delivered and operational in July 1954. It cost approximately $135,000 (more than $1 million in 2016 dollars). That did not include the operator's console, paper tape input and output, punch card unit, or other related equipment. It featured magnetic drum storage of about 4000 words (a "word" being a number or command) and a word length of 10 decimal digits. It contained more than 1,500 vacuum tubes.

For more information about the history of JPL, contact the JPL Archives for assistance. [Archival and other sources: Section 371 photo albums, Combined Bimonthly Summary No. 33, Datatron Chronology.)