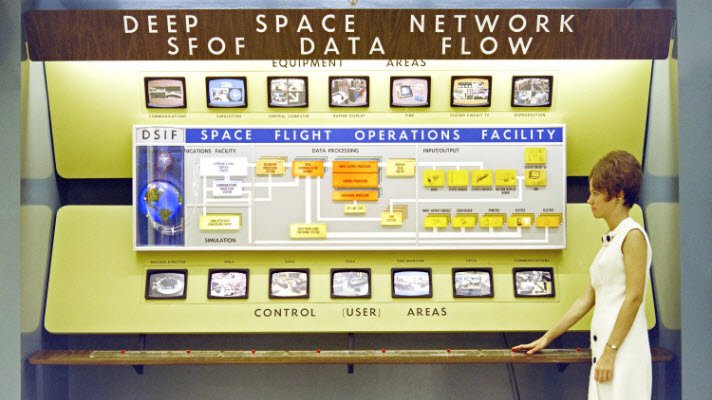 In October 1967 Mariner 5 had just reached Venus, JPL was looking forward to the 10th anniversary of Explorer 1 and the launches of Surveyor 6 and 7 to the Moon, and Mariner 6 and 7 were in development.

When visitors were escorted into the lobby of the Space Flight Operations Facility (SFOF), they saw the reception/security desk, a waiting area, and this new exhibit. It explained the flow of data from a spacecraft to the Deep Space Network stations (or Deep Space Instrumentation Facilities) to the SFOF. A series of photos showed various work stations in the SFOF, as well as the technology being used in the facility (in the main operations area and behind the scenes). During 1967 and 1968, JPL hosted visits by NASA staff, members of Congress, foreign dignitaries, JPL contractors/partners, former employees, student groups, professional groups, celebrities, and the press.

For more information about the history of JPL, contact the JPL Archives for assistance. [Archival sources: 318 and P photo albums and index.]