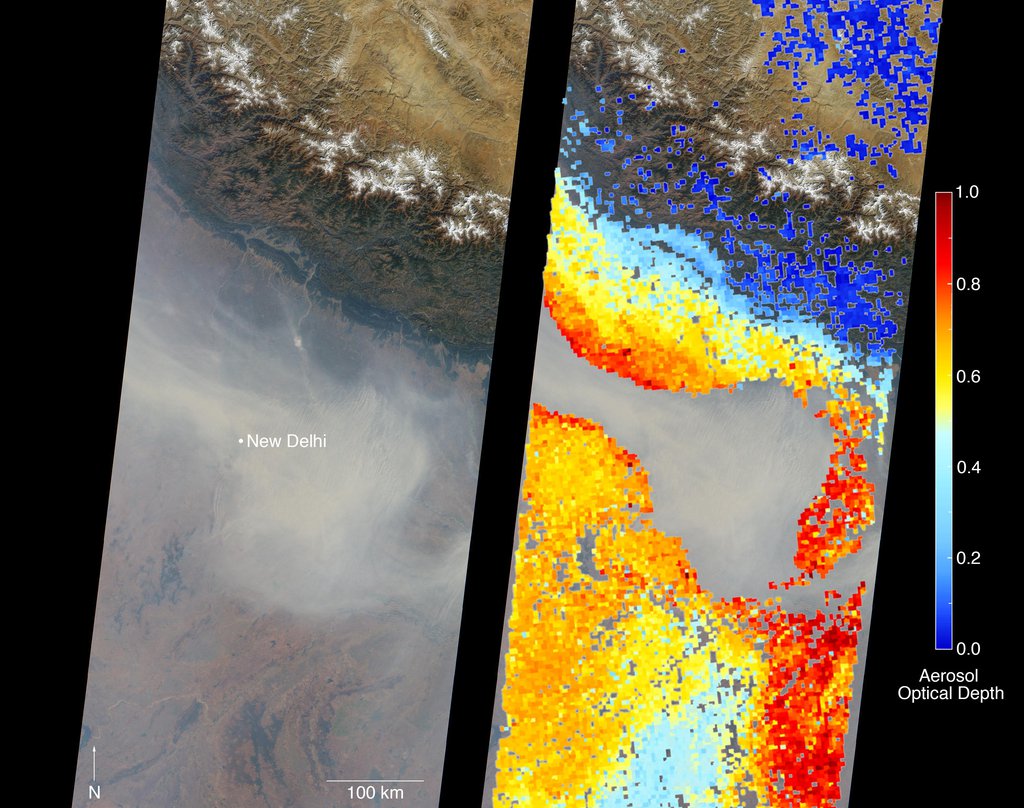 New Delhi, India's capital city, is currently suffering though a period of particularly poor air quality. In early November 2016, monitors at various locations in the area posted air quality index measurements as high as the 900s (the most severe ranking, "hazardous," is any air quality index measurement over 300). Thousands of schools have been closed, and a survey by the Associate Chambers of Commerce and Industry of India reports that 10 percent of the city's workers called in sick due to air-pollution-related health issues. According to several published news reports, the extreme air pollution may be due to a combination of nearby agricultural burning after harvest, urban construction and solid-waste burning, as well as remnants of firecracker smoke and additional car emissions after the celebration of Diwali, the Hindu festival of lights, on October 30.

The Multi-angle Imaging SpectroRadiometer (MISR) instrument aboard NASA's Terra satellite passed over the region on Saturday, Nov. 5, 2016, at around 11:05 a.m. local time. At left is an image acquired from MISR's vertical viewing camera. The Himalayas stretch across the northern portion of the image. This towering mountain range tends to concentrate pollution in the region immediately to the south, including New Delhi, by preventing pollutants from blowing northwards. New Delhi, whose location is indicated on the image, is under a patch of especially thick haze. At 6:00 a.m. local time on that date, the U.S. Mission India NowCast Air Quality Index for New Delhi was reported at 751, more than twice the threshold for hazardous air quality.

These data were acquired during Terra orbit 89805. Other MISR data are available through the NASA Langley Research Center; for more information, go to http://eosweb.larc.nasa.gov/project/misr/misr_table. MISR was built and is managed by NASA's Jet Propulsion Laboratory, Pasadena, California, for NASA's Science Mission Directorate, Washington, D.C. The Terra spacecraft is managed by NASA's Goddard Space Flight Center, Greenbelt, Maryland. The MISR data were obtained from the NASA Langley Research Center Atmospheric Science Data Center, Hampton, Virginia. JPL is a division of the California Institute of Technology in Pasadena.