Rover Tracks in Northward View Along West Rim of Endeavour 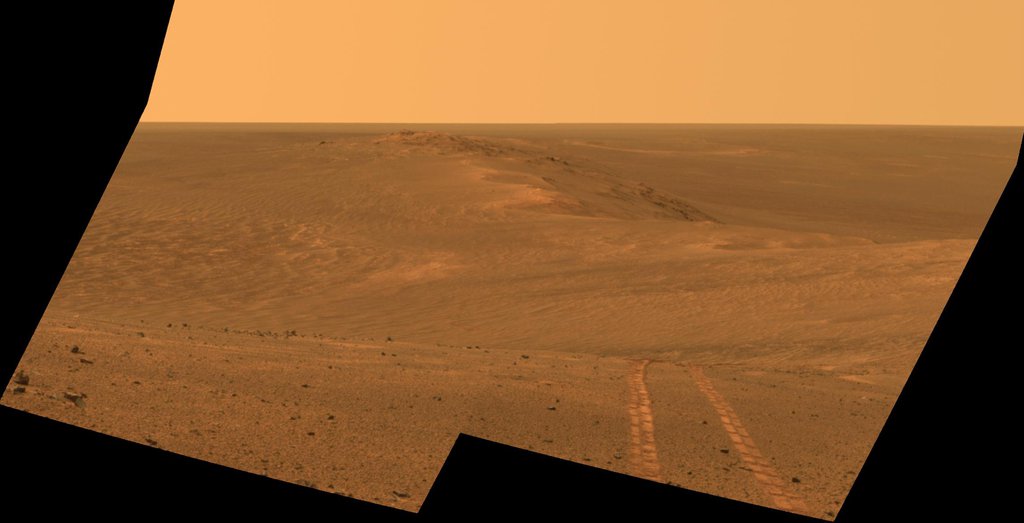 This scene from the panoramic camera (Pancam) on NASA's Mars Exploration Rover Opportunity looks back toward part of the west rim of Endeavour Crater that the rover drove along, heading southward, during the summer of 2014.

The vista merges multiple Pancam exposures taken on August 15, 2014, during the 3,754th Martian day, or sol, of Opportunity's work on Mars.

The high point on the rim in the left half of the scene is the southern end of "Murray Ridge." Tracks from drives from mid-July 2014 are faintly visible near there, and tracks from subsequent drives advance to the foreground. For scale, the distance between Opportunity's parallel wheel tracks is about 3.3 feet (1 meter).

The most distant visible tracks are from nearly half a mile (more than 700 meters) prior to Opportunity's arrival at the viewpoint from which this scene was recorded.

This version of the image is presented in approximate true color by combing exposures taken through three of the Pancam's color filters, centered on wavelengths of 753 nanometers (near-infrared), 535 nanometers (green) and 432 nanometers (violet).

A false-color version, at https://photojournal.jpl.nasa.gov/catalog/PIA18605, makes the tracks more visible. A video at http://www.jpl.nasa.gov/video/?id=1325 places the scene into context of the rover's entire route of more than 25 miles (40 kilometers) since its 2004 landing. A map indicating the rover's Sol 3754 location (as the location reached by a Sol 3752 drive) is online at http://mars.nasa.gov/mer/mission/tm-opportunity/opportunity-sol3757.html.