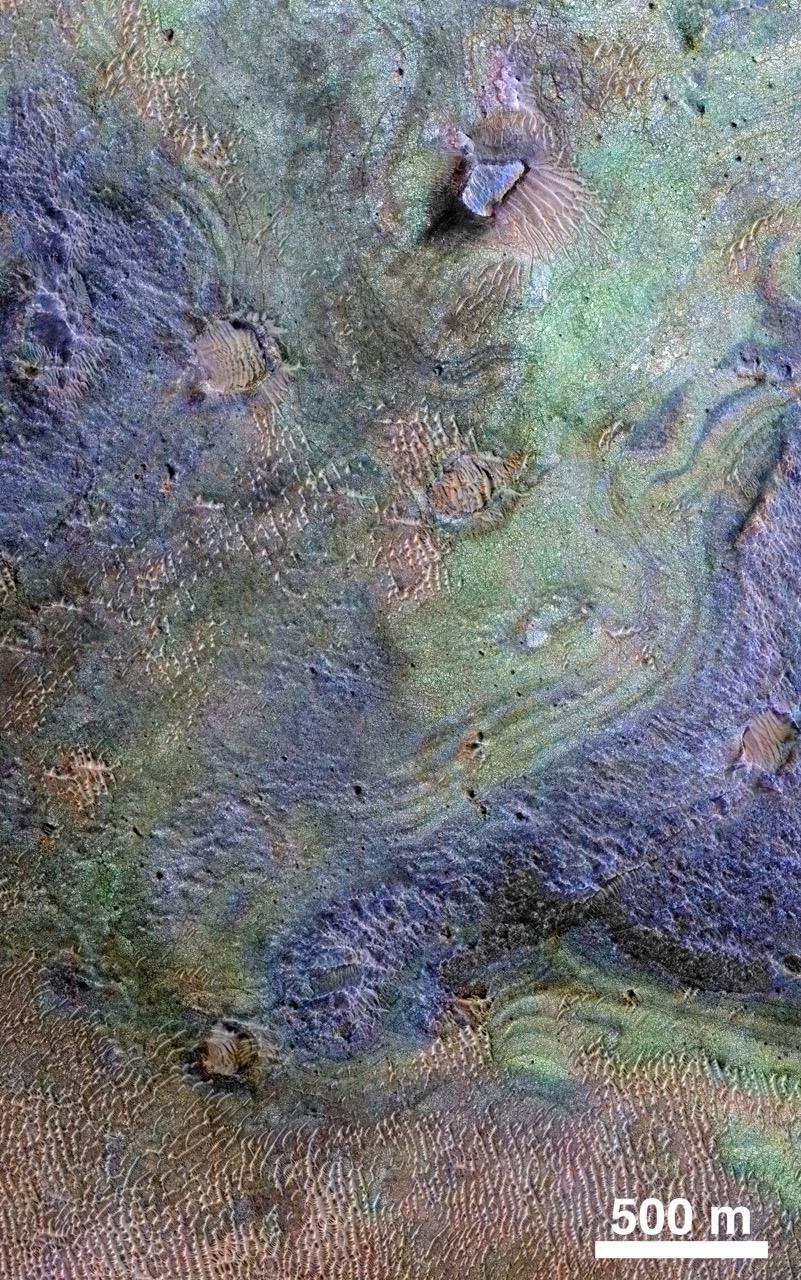 This view combines information from two instruments on NASA's Mars Reconnaissance Orbiter to map color-coded composition over the shape of the ground in a small portion of the Nili Fossae plains region of Mars' northern hemisphere.

Carbon dioxide from the atmosphere on early Mars reacted with surface rocks to form carbonate, thinning the atmosphere by sequestering the carbon in the rocks.

An analysis of the amount of carbon contained in Nili Fossae plains estimated the total at no more than twice the amount of carbon in the modern atmosphere of Mars, which is mostly carbon dioxide. That is much more than in all other known carbonate on Mars, but far short of enough to explain how Mars could have had a thick enough atmosphere to keep surface water from freezing during a period when rivers were cutting extensive valley networks on the Red Planet. Other possible explanations for the change from an era with rivers to dry modern Mars are being investigated.

This image covers an area approximately 1.4 miles (2.3 kilometers) wide. A scale bar indicates 500 meters (1,640 feet). The full extent of the carbonate-containing deposit in the region is at least as large as Delaware and perhaps as large as Arizona.

The color coding is from data acquired by the Compact Reconnaissance Imaging Spectrometer for Mars (CRISM), in observation FRT0000C968 made on Sept. 19, 2008. The base map showing land shapes is from the High Resolution Imaging Science Experiment (HiRISE) camera. It is one product from HiRISE observation ESP_010351_2020, made July 20, 2013. Other products from that observation are online at http://www.uahirise.org/ESP_032728_2020.

The Mars Reconnaissance Orbiter has been using CRISM, HiRISE and four other instruments to investigate Mars since 2006. The Johns Hopkins University Applied Physics Laboratory, Laurel, Maryland, led the work to build the CRISM instrument and operates CRISM in coordination with an international team of researchers from universities, government and the private sector. HiRISE is operated by the University of Arizona, Tucson, and was built by Ball Aerospace & Technologies Corp., Boulder, Colorado.