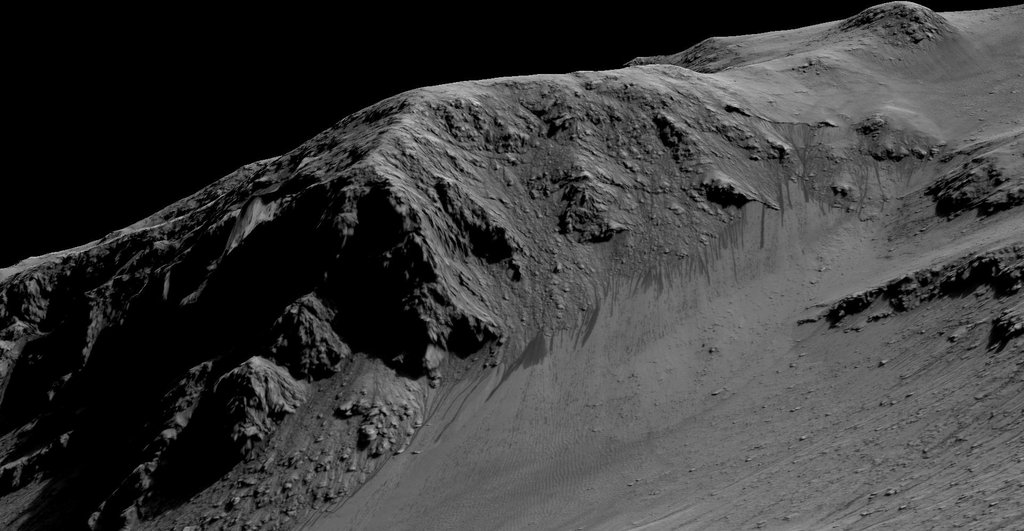 The dark, narrow streaks flowing downhill on Mars at sites such as this portion of Horowitz Crater are inferred to be formed by seasonal flow of water on modern-day Mars. The streaks are roughly the length of a football field.

These dark features on the slopes are called "recurring slope lineae" or RSL. Planetary scientists using observations with the Compact Reconnaissance Imaging Spectrometer on the same orbiter detected hydrated salts on these slopes at Horowitz Crater, corroborating the hypothesis that the streaks are formed by briny liquid water.

The image was produced by first creating a 3-D computer model (a digital terrain map) of the area based on stereo information from two HiRISE observations, and then draping an image over the land-shape model. The vertical dimension is exaggerated by a factor of 1.5 compared to horizontal dimensions. The draped image is a red waveband (monochrome) product from HiRISE observation PSP_005787_1475, taken on Oct. 21, 2007, at 32 degrees south latitude, 141 degrees east longitude. Other image products from this observation are at http://www.uahirise.org/PSP_005787_1475.