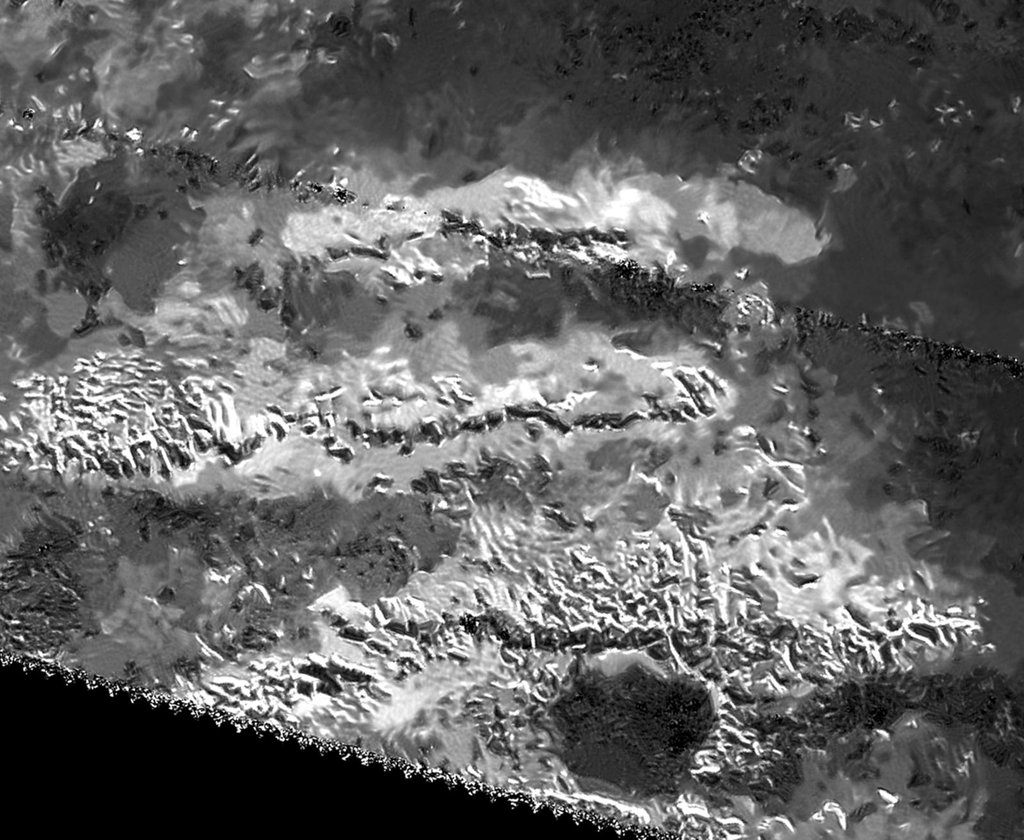 The trio of ridges on Titan known as Mithrim Montes is home to the hazy Saturnian moon's tallest peak. The mountain, which has an elevation of 10,948 feet (3,337 meters), is located midway along the lower of the three ridges shown in this radar image from NASA's Cassini spacecraft.

Radar images do not present scenes as they would appear to human eyes. Instead of sunlight, radar images use radio waves beamed by the spacecraft that are reflected and scattered off of Titan's surface in order to see through Titan's opaque atmosphere. Bright regions indicate materials that are rough or that otherwise scatter the beam; dark regions indicate materials that are relatively smooth or that otherwise absorb radar waves. A side effect of this technique is the grainy pattern called "speckle" that typically is present in Cassini radar images.

A labeled version of this image is also available in Figure 1, along with a version produced using more standard processing (without despeckling) in Figure 2. This area was also featured in previous Cassini radar image releases (see PIA13331 and PIA10654).

Titan's icy crust sits atop a deep ocean of liquid water that probably acts much like Earth's upper mantle -- the layer of hot, high-pressure rock below the crust that can slowly flow and deform over time. Once a period of mountain-building ends, these fluid layers (Earth's upper mantle and Titan's liquid ocean) allow the crust to relax, like a person settling into a waterbed. Also, at great depth, the water-ice bedrock of Titan is softer than rock on Earth. Because of these characteristics, scientists would not expect mountains on Titan to tower quite as high as those on Earth, which can rise to heights of more than 5 miles (nearly 9 kilometers). The fact that Titan has significant mountains at all suggests that some active tectonic forces could be affecting the surface, for example, related to Titan's rotation, tidal forces from Saturn or cooling of the crust.

This radar view was obtained on May 12, 2008 (the flyby called "T-43" by the Cassini team). The image is centered at 2 degrees south latitude, 127 degrees west longitude. The incidence angle is about 34 degrees.

The Cassini-Huygens mission is a cooperative project of NASA, ESA (the European Space Agency) and the Italian Space Agency. NASA's Jet Propulsion Laboratory, a division of the California Institute of Technology in Pasadena, manages the mission for NASA's Science Mission Directorate, Washington. The Cassini orbiter was designed, developed and assembled at JPL. The radar instrument was built by JPL and the Italian Space Agency, working with team members from the United States and several European countries.