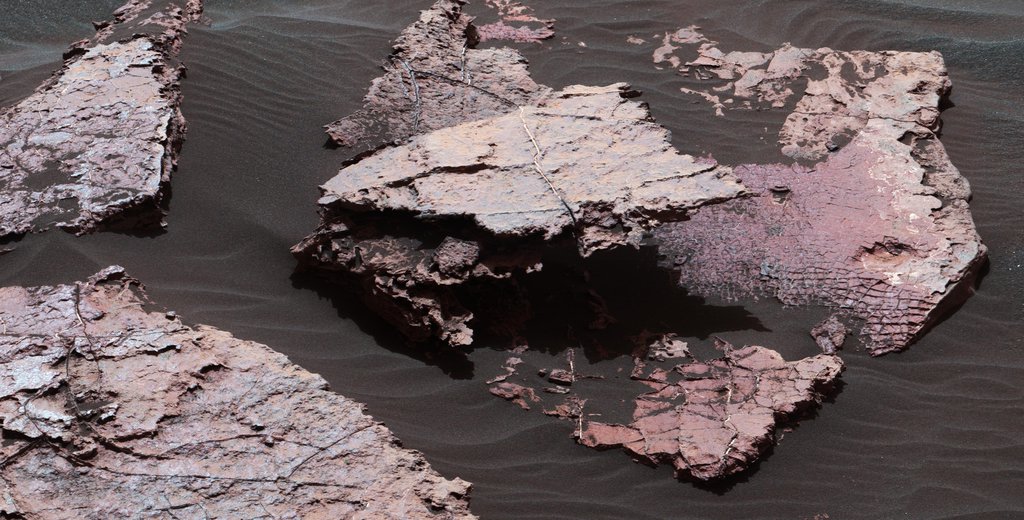 A grid of small polygons on the Martian rock surface near the right edge of this view may have originated as cracks in drying mud more than 3 billion years ago. Multiple images from the Mast Camera (Mastcam) on NASA's Curiosity Mars rover were combined for this mosaic of a block called "Squid Cove" and its immediate surroundings.

The location is within an exposure of Murray formation mudstone on lower Mount Sharp inside Gale Crater. Mastcam's right-eye camera, which has a telephoto lens, took the component images of this view on Dec. 20, 2016, during the 1,555th Martian day, or sol, of Curiosity's work on Mars. The rover drove farther uphill on Gale Crater before the possible mud cracks were detected in the Mastcam images. This possible evidence about the area's ancient environment prompted the rover mission to backtrack for closer inspection of Squid Cove and nearby target rocks.

This scene is presented with a color adjustment that approximates white balancing, to resemble how the rocks and sand would appear under daytime lighting conditions on Earth.

The polygons are about half an inch to 1 inch (about 1 to 2 centimeters) across. Figure 1 includes a scale bar of 30 centimeters (12 inches). The polygons are outlined by ridges. This could result from a three-step process after cracks form due to drying: Wind-blown sediments accumulate in the open cracks. Later, these sediments and the dried mud become rock under the pressure of multiple younger layers that accumulate on top of them. Most recently, after the overlying layers were eroded away by wind, the vein-filling material resists erosion better than the once-muddy material, so the pattern that began as cracks appears as ridges.

Mud cracks would be evidence of a drying interval between wetter periods that supported lakes in the area. Curiosity has found evidence of ancient lakes in older, lower-lying rock layers and also in younger mudstone that is above Squid Cove.