Possible Interiors of the TRAPPIST-1 Exoplanets 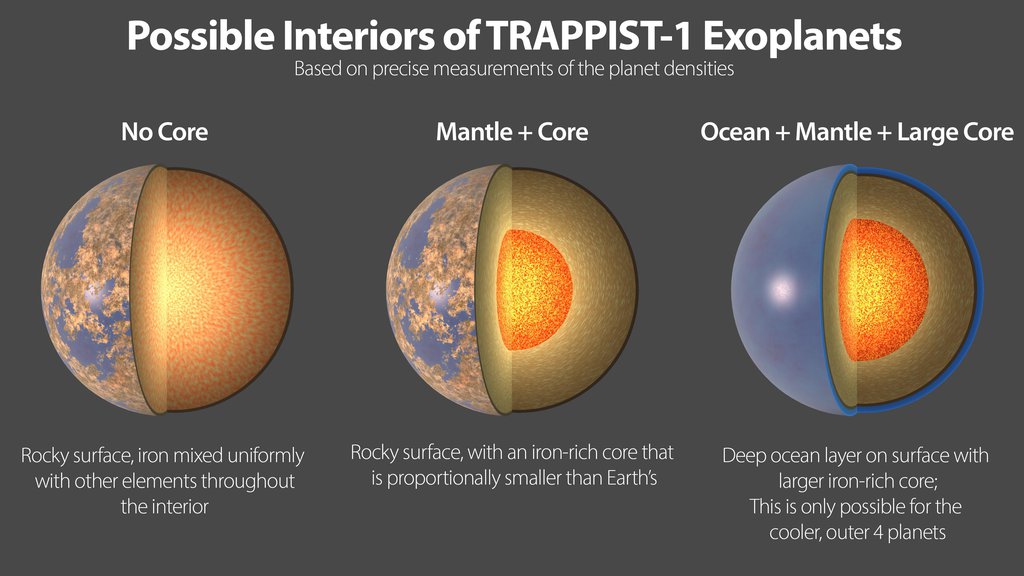 This illustration shows three possible interiors of the seven rocky exoplanets in the TRAPPIST-1 system, based on precision measurements of the planet densities. Overall the TRAPPIST-1 worlds have remarkably similar densities, which suggests they may share the same ratio of common planet-forming elements. The planet densities are slightly lower than those of Earth or Venus, which could mean they contain fractionally less iron (a highly dense material) or more low-density materials, such as water or oxygen.

In the first model (left), the interior of the planet is composed of rock mixed with iron bound to oxygen. There is no solid iron core, which is the case with Earth and the other rocky planets in our own solar system.

The second model shows an overall composition similar to Earth's, in which the densest materials have settled to the center of the planet, forming an iron-rich core proportionally smaller than Earth's core.

A variation is shown in the third panel, where a larger, denser core could be balanced by an extensive low-density ocean on the planet's surface. However, this scenario can be applied only to the outer four planets in the TRAPPIST-1 system. On the inner three planets, any oceans would vaporize due to the higher temperatures near their star, and a different composition model is required. Since all seven planets have remarkably similar densities, it is more likely that all the planets share a similar bulk composition, making this fourth scenario unlikely but not impossible.

The high-precision mass and diameter measurements of the exoplanets in the TRAPPIST-1 system have allowed astronomers to calculate the overall densities of these worlds with an unprecedented degree of accuracy in exoplanet research. Density measurements are a critical first step in determining the composition and structure of exoplanets, but they must be interpreted through the lens of scientific models of planetary structure.