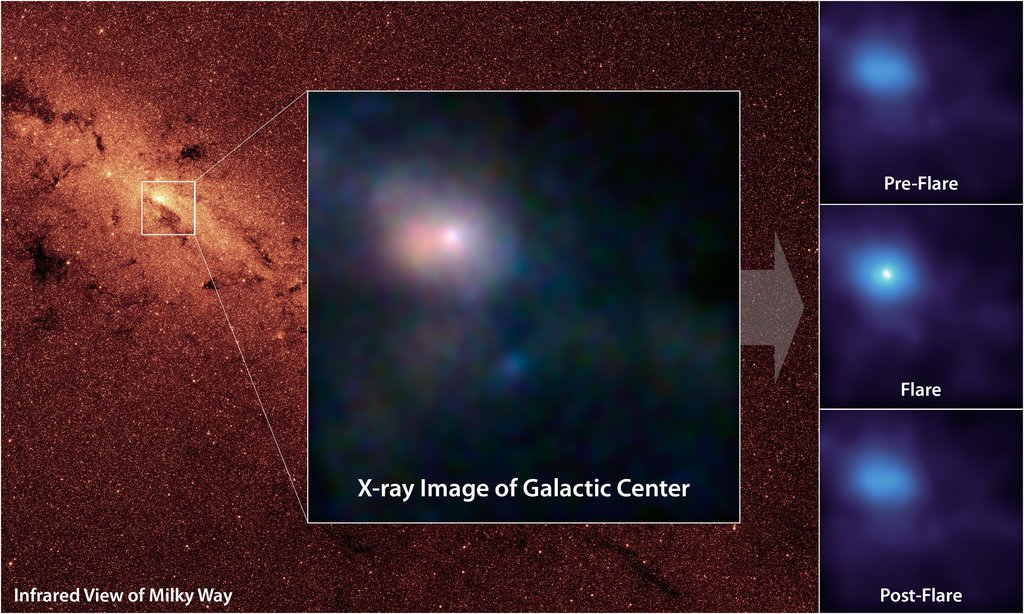 NASA's Nuclear Spectroscopic Telescope Array, or NuSTAR, has captured these first, focused views of the supermassive black hole at the heart of our galaxy in high-energy X-ray light. The background image, taken in infrared light, shows the location of our Milky Way's humongous black hole, called Sagittarius A*, or Sgr A* for short. NuSTAR is the first telescope to be able to focus high-energy X-rays, giving astronomers a new tool for probing extreme objects such as black holes.

In the main image, the brightest white dot is the hottest material located closest to the black hole, and the surrounding pinkish blob is hot gas, likely belonging to a nearby supernova remnant. The time series at right shows a flare caught by NuSTAR over an observing period of two days in July; the middle panel shows the peak of the flare, when the black hole was consuming and heating matter to temperatures up to 180 million degrees Fahrenheit (100 million degrees Celsius).

The main image is composed of light seen at four different X-ray energies. Blue light represents energies of 10 to 30 kiloelectron volts (keV); green is 7 to 10 keV; and red is 3 to 7 keV. The time series shows light with energies of 3 to 30 keV.

The background image of the central region of our Milky Way was taken at shorter infrared wavelengths by NASA's Spitzer Space Telescope.