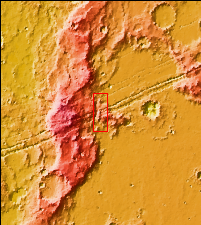 The linear features in this VIS image are tectonic graben. These graben are called Sirenum Fossae. Graben are formed by extension of the crust and faulting. When large amounts of pressure or tension are applied to rocks on timescales that are fast enough that the rock cannot respond by deforming, the rock breaks along faults. In the case of a graben, two parallel faults are formed by extension of the crust and the rock in between the faults drops downward into the space created by the extension. Several graben are visible in this THEMIS VIS image, trending from east to west. Because the faults defining the graben are formed parallel to the direction of the applied stress, we know that extensional forces were pulling the crust apart in the north/south direction. The majority of the stresses that created Sirenum Fossae are aligned in the in a north-northwest to south-southeast direction. The Sirenum Fossae graben are 2735km (1700 miles) long.