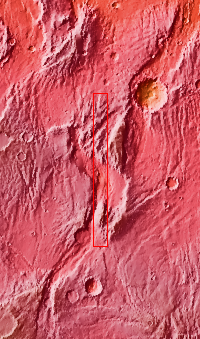 Today's VIS image shows an unnamed region of fractures and graben. Located south of Solis Planum, between Claitas Fossae and Coracis Fossae, this region of fossae has the same appearance and graben orientation of the bordering named Fossae. Fossae are long linear depressions called graben and are formed by extension of the crust and faulting. When large amounts of pressure or tension are applied to rocks on timescales that are fast enough that the rock cannot respond by deforming, the rock breaks along faults. In the case of a graben, two parallel faults are formed by extension of the crust and the rock in between the faults drops downward into the space created by the extension.