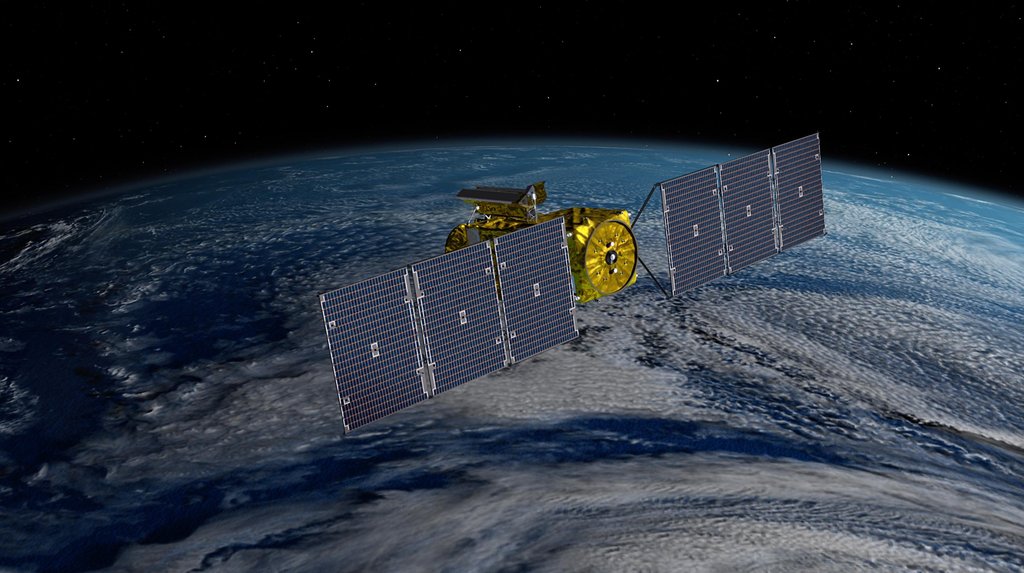 This illustration depicts the Surface Water and Ocean Topography (SWOT) satellite with solar arrays fully deployed. Arranged on opposite sides of the spacecraft bus, the two arrays will remain pointed at the Sun via small motors to provide 8 kilowatts of power; the spacecraft has a 1.5-kilowatt total power demand. The arrays measure 48.8 feet (14.9 meters) in length with an area of 335 square feet (31 square meters).

SWOT will make global surveys of the water on Earth's surface. By measuring its height, researchers can track the volume and location of the finite resource around the world. The data will help with monitoring changes in floodplains and wetlands, measure how much fresh water flows into and out of lakes and rivers and back to the ocean, and track regional shifts in sea level.

SWOT is being jointly developed by NASA and the French space agency Centre National d'Études Spatiales (CNES), with contributions from the Canadian Space Agency (CSA) and the UK Space Agency. NASA's Jet Propulsion Laboratory, which is managed for the agency by Caltech in Pasadena, California, leads the U.S. component of the project. For the flight system payload, NASA is providing the Ka-band Radar Interferometer (KaRIn) instrument, a GPS science receiver, a laser retroreflector, and a two-beam microwave radiometer. CNES is providing the Doppler Orbitography and Radioposition Integrated by Satellite (DORIS) system, nadir altimeter, and the KaRIn RF subsystem (with support from the UK Space Agency). CSA is providing the KaRIn high-power transmitter assembly. NASA is providing associated launch services.