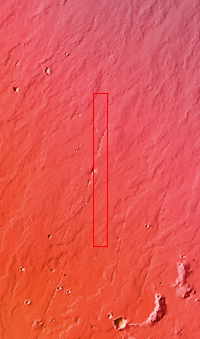 Today's VIS image shows a small portion of the immense lava flows that originated from Arsia Mons. Arsia Mons is the southernmost of the three large aligned volcanoes in the Tharsis region. Arsia Mons' last eruption was 10s of million years ago. The different surface textures are created by differences in the lava viscosity and cooling rates. The lobate margins of each flow can be traced back to the start of each flow — or to the point where they are covered by younger flows. Flows in Daedalia Planum can be as long as 180 km (111 miles). For comparison the longest Hawaiian lava flow is only 51 km (˜31 miles) long. The long linear feature in the image is a tectonic graben, formed when a block of material slides downward between paired faults. It is very common to have both tectonic and volcanic processes affecting the same region. The total area of Daedalia Planum is 2.9 million square km – more than four times the size of Texas.