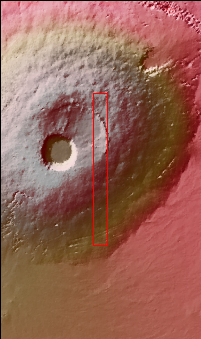 This VIS image shows a cross section of Pavonis Mons, including part of the summit caldera (circular region near the top of the image). Pavonis Mons is the central volcano of the three large Tharsis volcanoes. In order from north to south the volcanoes are Ascreaus Mons, Pavonis Mons and Arsia Mons. All three volcanoes form a line located along a tectonic bulge caused by extensional forces in the region. Along this trend there are increased tectonic features and additional lava flows that arose from the flanks of the volcanoes rather than just the summit. Like the other large volcanoes in the region, Pavonis Mons is a shield volcano. Shield volcanoes are formed by lava flows originating near or at the summit, building up layers upon layers of lava. In shield volcanoes summit calderas are typically formed where the surface collapses into the void formed by an emptied magma chamber. Pavonis Mons is the smallest of the three volcanoes with a summit of only 14km (8.7 miles) and a width of 375 km (233 miles). Like most shield volcanoes the surface has a low profile. In the case of Pavonis Mons the average slope is only 4 degrees. Pavonis means peacock in Latin, making it's name peacock mountain.