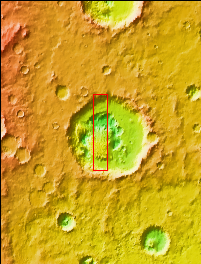 Today's VIS image shows part of the floor of Rabe Crater. Located in Noachis Terra, Rabe Crater is 108 km (67 miles) across. Dunes cover the majority of this image of Rabe Crater. As the dunes are created by wind action the forms of the dunes record the wind direction. Dunes will have a long low angle component and a short high angle side. The steep side is called the slip face. The wind blows up the long side of the dune. In this VIS image the slip faces are illuminated more than the longer side. In this part of the crater the winds were generally moving from the lower right corner of the image towards the upper left.

Craters of similar size as Rabe Crater often have flat floors. Rabe Crater has some areas of flat floor, but also has a large complex pit occupying a substantial part of the floor. The interior fill of the crater is thought to be layered sediments created by wind and or water action. The pit is eroded into this material. The eroded materials appear to have stayed within the crater forming a large sand sheet with surface dune forms as well as individual dunes where the crater floor is visible. Several other craters in this region have complex floors with pits.