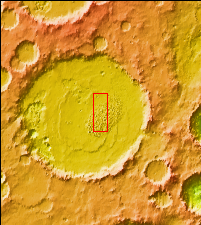 This VIS image displays sand dunes within Proctor Crater. These dunes are composed of basaltic sand that has collected in the bottom of the crater. The topographic depression of the crater forms a sand trap that prevents the sand from escaping. Dune fields are common in the bottoms of craters on Mars and appear as dark splotches that often lean up against the downwind walls of the craters. Dunes are useful for studying both the geology and meteorology of Mars. The sand forms by erosion of larger rocks, but it is unclear when and where this erosion took place on Mars or how such large volumes of sand could be formed. The dunes also indicate the local wind directions by their morphology. In this case, there are few clear slipfaces that would indicate the downwind direction. The crests of the dunes also typically run north-south in the image. This dune form indicates that there are probably two prevailing wind directions that run east and west (left to right and right to left). Proctor Crater is located in Noachis Terra and is 168 km (104 miles) in diameter.