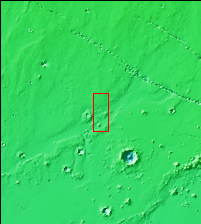 Today's VIS image shows part of Athabasca Valles. Multiple streamlined islands are seen in this image. The teardrop shaped features were formed by liquid flow deflected around features such as craters and hills. The 'tail' of the island points downstream. The source of the fluid was likely an outburst of groundwater, perhaps related to the Elysium volcanic complex located to the northwest of this image.

Arising from Cerberus Fossae, the formation mode of this channel is still being debated. While the channel features are similar to water flow, other features are similar to lava flows, and yet other features have an appearance of slabs of material that floated on an underlying fluid. It is thought that Athabasca Valles is the youngest outflow channel system on Mars. Athabasca Valles is just one of the complex channel formations in the Elysium Planitia region.