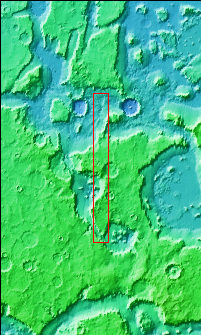 Today's VIS image shows a section of Mamers Valles. The channel enters a crater in the center of the image and exits at the top of the image. The channel is nearly 1000 km long (600 miles). Mamers Valles originates near Cerulli Crater in northern Arabia Terra, and after a short section near the crater where flow is to the south, flows northward to empty in Deuteronilus Mensae. The steep walls of Mamers Valles can reach heights of 1200 m (4000 feet).