Dust Rings in the Wolf-Rayet 140 System 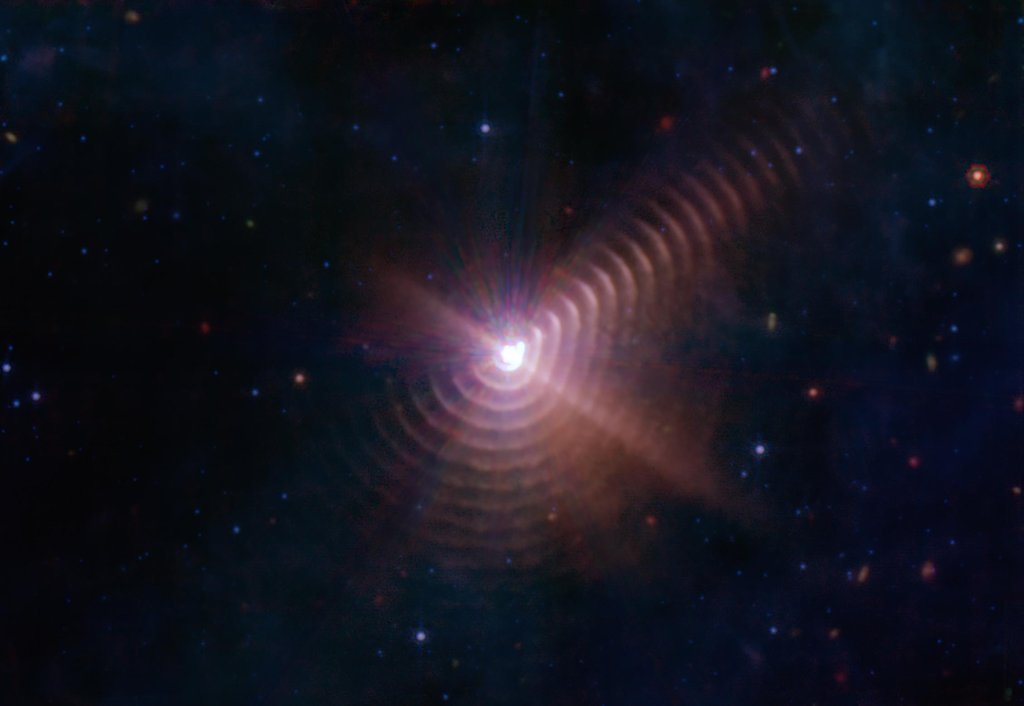 This image from NASA's James Webb Space Telescope reveals at least 17 concentric dust rings emanating from a pair of stars orbiting one another. Located just over 5,000 light-years from Earth, the system is known as Wolf-Rayet 140 because one of the stars is a Wolf-Rayet star. The other is an O-type star, one of the most massive star types known. Each ring was created when the two stars came close together and their stellar winds (streams of gas they blow into space) collided, compressing the gas and forming dust. A ring is produced once per orbit, every 7.93 years.

A Wolf-Rayet star is an O-type star born with at least 25 times more mass than our Sun that is nearing the end of its life, when it will likely collapse directly to black hole, or explode as a supernova. These delays between periods of dust production create the unique ring pattern. Some Wolf-Rayet binaries in which the stars are close enough together and have circular orbits produce dust continuously, often forming a pinwheel pattern. WR 140's rings are also referred to as shells because they are not perfectly circular and are thicker and wider than they appear in the image.

The rings appear brighter in some areas but are almost invisible in others, rather than forming a perfect "bullseye" pattern. That's because production of dust is variable as the stars get close to one another, and because Webb views the system at an angle and is not looking directly at the orbital plane of the stars. One of the densest regions of dust production creates the bright feature appearing at 2 o'clock.

The image was taken by the Mid-Infrared Instrument (MIRI), now managed by the agency's Goddard Space Flight Center. MIRI was developed through a 50-50 partnership between NASA and ESA (European Space Agency). The Jet Propulsion Laboratory in Southern California led the effort for NASA, and a multinational consortium of European astronomical institutes contributed for ESA. Webb's science instruments detect infrared light, a range of wavelengths emitted by warm objects and invisible to the human eye. MIRI detects the longest infrared wavelengths, which means it can often see cooler objects – including these dust rings – than the other three Webb instruments can.

The most common element found in stars, hydrogen, can't form dust on its own. But Wolf-Rayet stars in their later stages have blown away all of their hydrogen, so they eject elements typically found deep in a star's interior, like carbon, which can form dust. Data from MIRI's Medium Resolution Spectrometer (MRS) shows that the dust made by WR 140 is likely made of a class of molecules called polycyclic aromatic hydrocarbons (PAHs), which are a type of organic carbon-rich compounds that are thought to enrich the carbon content throughout the Universe.

Initial processing of the Webb WR 140 data included eight bright "spikes" of light emanating from the center of the image. These are not features of the system, but so-called artifacts of the telescope itself. They were removed from the image, in order to give viewers an unobscured view of the source object.