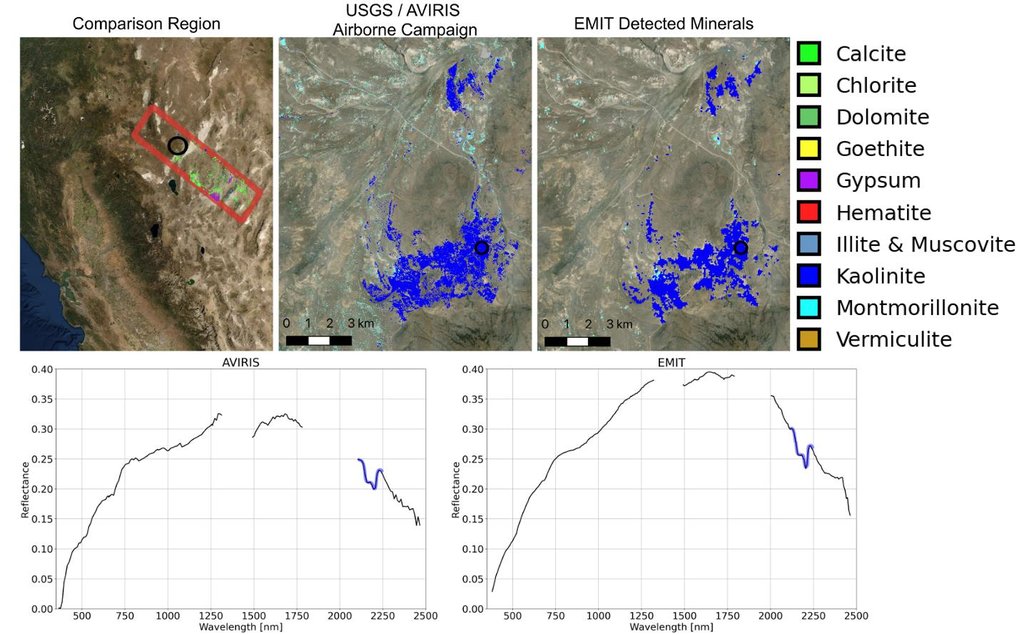 EMIT recently collected data from a mountainous area of Nevada about 130 miles (209 kilometers) northeast of Lake Tahoe. The instrument measures reflected solar energy from Earth across hundreds of wavelengths from the visible to the infrared range of the spectrum. The intensity of the reflected light varies by wavelength based on the material. Scientists use these patterns, called spectral fingerprints, to pinpoint the locations of surface minerals on a map.

The top left map shows the region both the EMIT and AVIRIS data sets cover. The center image is a mineral map featuring AVIRIS data. At right is a map generated with EMIT data. The center and right images reveal portions of the landscape dominated by kaolinite, a light-colored clay mineral that scatters sunlight. This comparison, which shows a close match of the data, was one of many that confirmed the accuracy of EMIT's data.

The bottom row features an AVIRIS spectral fingerprint, left, beside EMIT data for the same location. The graphs show agreement in the kaolinite fingerprint region, which is marked in blue.

EMIT was developed at NASA's Jet Propulsion Laboratory, which is managed for NASA by Caltech in Pasadena, California.