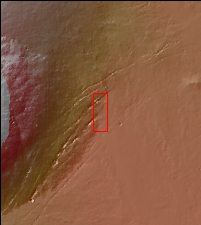 The linear features in this VIS image are called Oti Fossae. Oti Fossae is located on the eastern flank of Arsia Mons and aligns with the regional northeast/southwest trend of the major Tharsis volcanoes.

Graben are formed by extension of the crust and faulting. When large amounts of pressure or tension are applied to rocks on timescales that are fast enough that the rock cannot respond by deforming, the rock breaks along faults. In the case of a graben, two parallel faults are formed by extension of the crust and the rock in between the faults drops downward into the space created by the extension. The crustal deformation in this region was from the inflation of the surface by the rise of magma that created the Tharsis volcanoes.

Arsia Mons is the southernmost and youngest of the three large, aligned Tharsis volcanoes [Arsia Mons, Pavonis Mons and Ascreaus Mons, from south to north]. This alignment may indicate a large fracture/vent system was responsible for the eruptions that formed all three volcanoes. Arsia Mons is 270 miles (450km) in diameter, almost 12 miles (20km) high, and the summit caldera is 72 miles (120km) wide. For comparison, the largest volcano on Earth is Mauna Loa. From its base on the sea floor, Mauna Loa measures only 6.3 miles high and 75 miles in diameter.