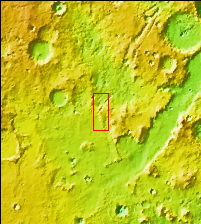 The THEMIS VIS camera contains 5 filters. The data from different filters can be combined in multiple ways to create a false color image. These false color images may reveal subtle variations of the surface not easily identified in a single band image. The linear depressions in today's false color image are part of Nili Fossae. Nili Fossae is a collection of curved faults and down-dropped blocks of crust between the faults. The "fossae," or graben, lie northeast of the large volcano Syrtis Major and northwest of the ancient impact basin Isidis Planitia. The troughs, which can be almost 500 meters (1,600 feet) deep , make concentric curves that follow the outline of Isidis Planitia. The graben likely formed as the crust sagged under the weight of lava flows filling the Isidis Planitia impact basin.

The THEMIS VIS camera is capable of capturing color images of the Martian surface using five different color filters. In this mode of operation, the spatial resolution and coverage of the image must be reduced to accommodate the additional data volume produced from using multiple filters. To make a color image, three of the five filter images (each in grayscale) are selected. Each is contrast enhanced and then converted to a red, green, or blue intensity image. These three images are then combined to produce a full color, single image. Because the THEMIS color filters don't span the full range of colors seen by the human eye, a color THEMIS image does not represent true color. Also, because each single-filter image is contrast enhanced before inclusion in the three-color image, the apparent color variation of the scene is exaggerated. Nevertheless, the color variation that does appear is representative of some change in color, however subtle, in the actual scene. Note that the long edges of THEMIS color images typically contain color artifacts that do not represent surface variation.