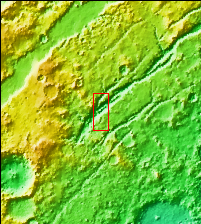 The linear depressions in today's VIS image are part of Nili Fossae. Nili Fossae is a collection of curved faults and down-dropped blocks of crust between the faults called graben. The graben lie northeast of the large volcano Syrtis Major and northwest of the ancient impact basin Isidis Planitia. Graben are formed by extension of the crust and faulting. When large amounts of pressure or tension are applied to rocks on timescales that are fast enough that the rock cannot respond by deforming, the rock breaks along faults. In the case of a graben, two parallel faults are formed by extension of the crust and the rock in between the faults drops downward into the space created by the extension. The crustal deformation in this region was in response to the basin forming event that created Isidis Planitia. The Nili Fossae graben arc around the northwestern edge of the planitia. The graben occur in many different widths.