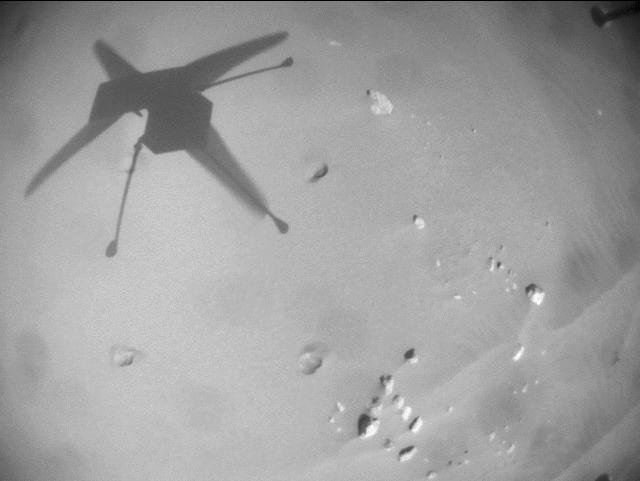 This animated GIF was generated using imagery acquired by the navigation camera aboard NASA's Ingenuity Mars Helicopter during its 25th flight on April 18, 2022. Covering a distance of 2,310 feet (704 meters) and at a speed of 12 mph (5.5 meters per second), it was the Red Planet rotorcraft's longest and fastest flight to date.

The first frame of the clip shows the view about one second into the flight. After reaching an altitude of 33 feet (10 meters), the helicopter heads southwest, accelerating to its maximum speed in less than three seconds. Ingenuity first flies over a group of sand ripples then, about halfway through the video, several rock fields. Finally, relatively flat and featureless terrain appears below, making a good landing spot. The video of the 161.3-second flight was speeded up approximately five times, reducing it to less than 35 seconds.

Ingenuity's navigation camera has been programmed to deactivate whenever the rotorcraft is within 3 feet (1 meter) of the surface. This helps ensure any dust kicked up during takeoff and landing won't interfere with the navigation system as it tracks features on the ground.