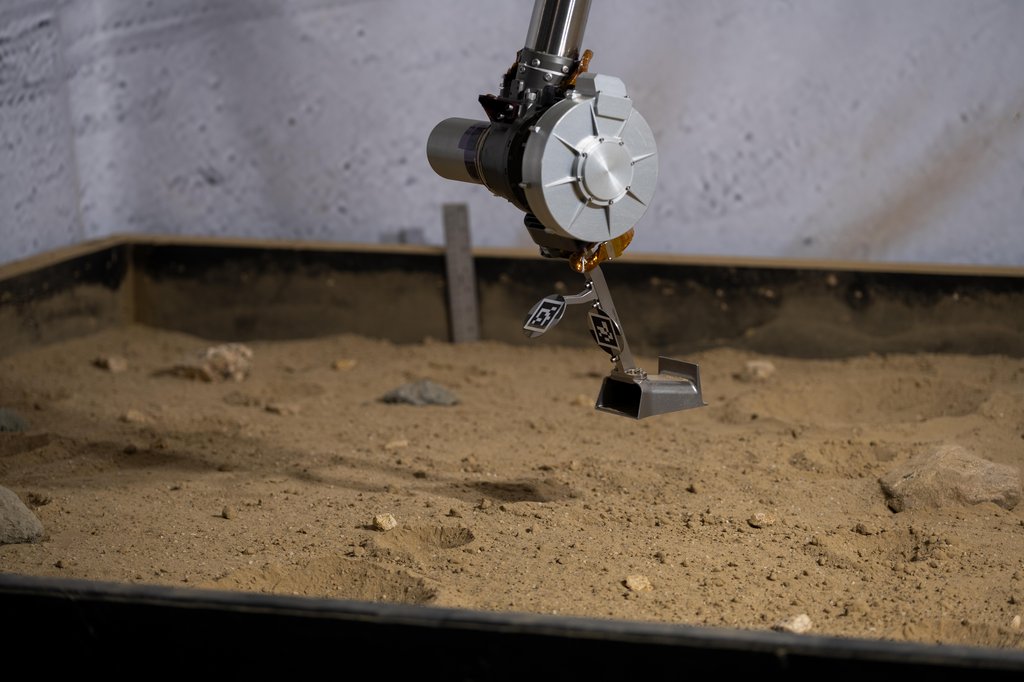 The 3D-printed titanium scoop of the Cold Operable Lunar Deployable Arm (COLDArm) robotic arm system is poised above a test bed filled with material to simulate lunar regolith (broken rocks and dust) at NASA's Jet Propulsion Laboratory in Southern California. COLDArm can function in temperatures as cold as minus 280 degrees Fahrenheit (minus 173 degrees Celsius).

COLDArm is designed to go on a Moon lander and operate during lunar night, a period that lasts about 14 Earth days. Frigid temperatures during lunar night would stymie current spacecraft, which must rely on energy-consuming heaters to stay warm.

To operate in the cold, the 6-foot-6-inch (2-meter) arm combines several key new technologies: gears made of bulk metallic glass that require no lubrication or heating, cold motor controllers that don't need to be kept warm in an electronics box near the core of the spacecraft, and a cryogenic six-axis force torque sensor that lets the arm "feel" what it's doing and make adjustments.

A variety of attachments and small instruments could go on the end of the arm, including the scoop, which could be used for collecting samples from a planet's surface. Like the arm on NASA's InSight Mars lander, COLDArm could deploy science instruments to the surface.

Motiv Space Systems, a partner on COLDArm, developed the cold motor controllers, and also built sections of the arm and assembled it from JPL-supplied parts at the company's Pasadena, California, facility. The COLDArm project is funded through the Lunar Surface Innovation Initiative and managed by the Game Changing Development program in NASA's Space Technology Mission Directorate.