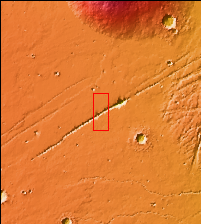 The linear feature in this VIS image is part of Labeatis Fossae. Fossae are linear depressions, most often caused by extensional tectonic forces pulling the crust apart and allowing material to slide downward between bounding faults. However, in this image, the feature has several circular features within the fossae. In regions of volcanic flows, the depression may be caused by roof collapse into an underlying void left by a lava tube. As this feature is located in the Tharsis volcanic region, it is likely that this feature was primarily created by volcanic collapse rather tectonic stress.