NEO Surveyor in an Infrared Starfield Filled With Asteroids (Illustration) 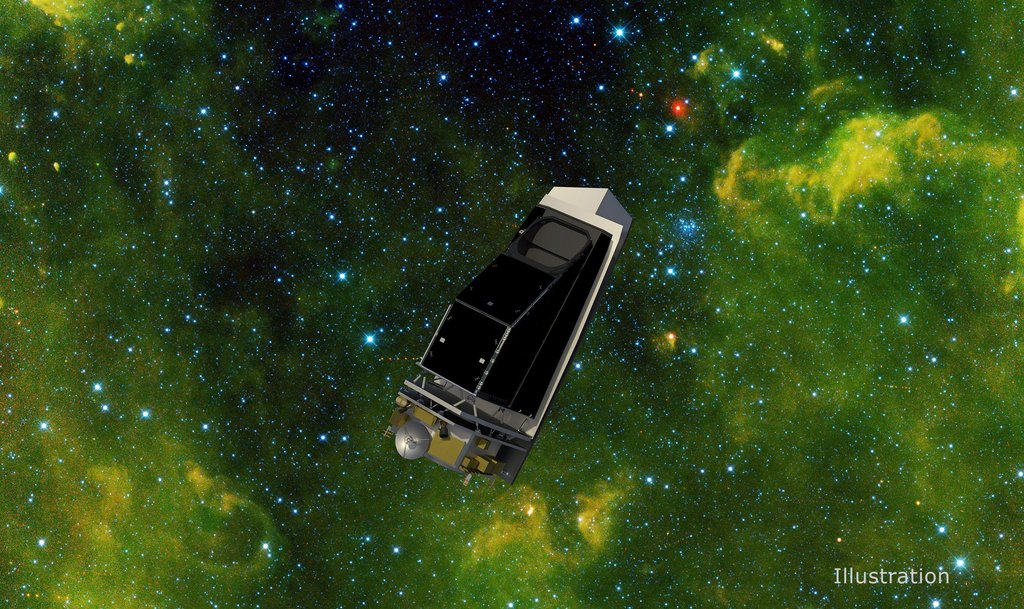 In this illustration showing NEO Surveyor, NASA's next-generation near-Earth object hunter, the spacecraft floats in an infrared starfield containing stars, star clusters, gas, and dust. More than 100 asteroids can be seen as red dots, with some of them visible in a track that shows how they were captured at different times as they marched across the sky. This starfield was observed by NASA's Wide-field Infrared Survey Explorer, or WISE, during its primary all-sky survey in March 2010 before it was put into hibernation a year later. In December 2013, the space telescope was reactivated to search for more asteroids as the NEOWISE mission.

NASA's NEO Surveyor will build upon the successes of NEOWISE as the first space mission built specifically to find large numbers of hazardous asteroids and comets. The space telescope will launch to a region of gravitational stability between the Earth and the Sun called the L1 Lagrange point, where the spacecraft will orbit during its five-year primary mission. From this location, the space telescope will view the solar system in infrared wavelengths – light that is invisible to the human eye. Because those wavelengths are mostly blocked by Earth's atmosphere, larger ground-based observatories may miss near-Earth objects that NEO Surveyor will be able to spot from space by using its modest light-collecting aperture of nearly 20 inches (50 centimeters).

NEO Surveyor's cutting-edge detectors are designed to observe two heat-sensitive infrared bands that were chosen specifically so the spacecraft can track the most challenging-to-find near-Earth objects, such as dark asteroids and comets that don't reflect much visible light. In the infrared wavelengths to which NEO Surveyor is sensitive, these objects glow as they are heated by sunlight. In addition, NEO Surveyor will be able to find asteroids that approach Earth from the direction of the Sun, as well as those that lead and trail our planet's orbit, where they are typically obscured by the glare of sunlight – objects known as Earth Trojans.

The mission is tasked by NASA's Planetary Science Division within the Science Mission Directorate; program oversight is provided by the PDCO, which was established in 2016 to manage the agency's ongoing efforts in planetary defense. NASA's Planetary Missions Program Office at Marshall Space Flight Center provides program management for NEO Surveyor.

The project is being developed by JPL and is led by survey director Amy Mainzer at the University of Arizona. Established aerospace and engineering companies have been contracted to build the spacecraft and its instrumentation, including Ball Aerospace , Space Dynamics Laboratory, and Teledyne. The Laboratory for Atmospheric and Space Physics at the University of Colorado, Boulder will support operations, and IPAC-Caltech in Pasadena, California, is responsible for processing survey data and producing the mission's data products. Caltech manages JPL for NASA.