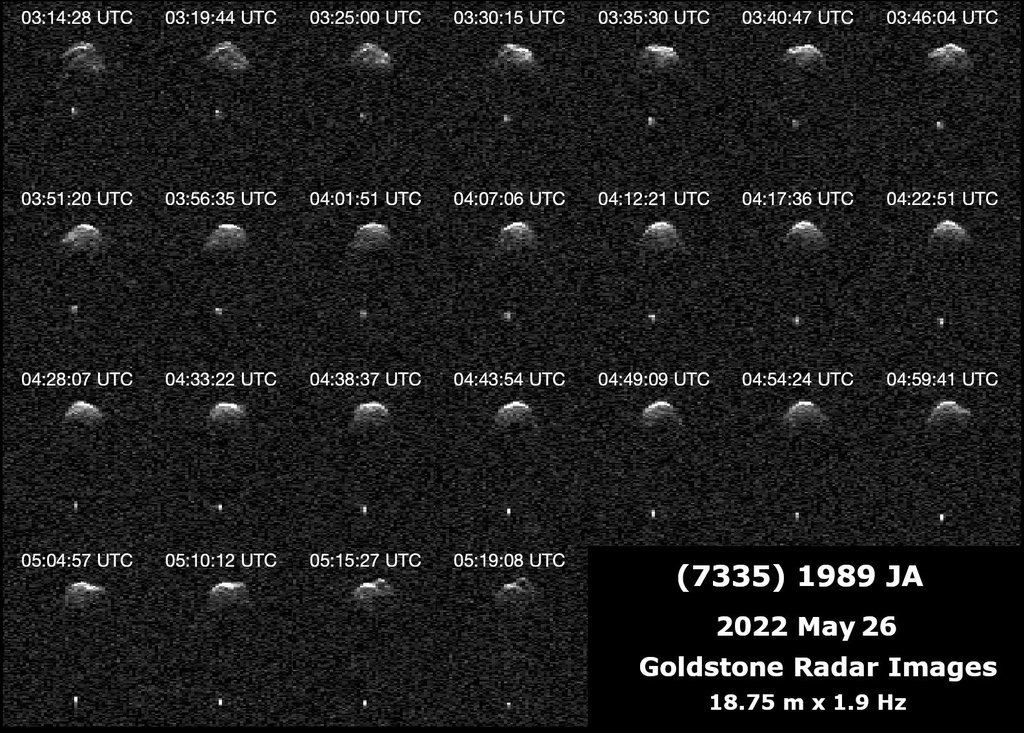 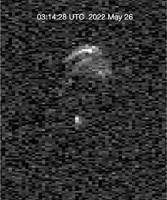 This collage and animation represent NASA radar observations of near-Earth asteroid 7335 1989 JA on May 26, 2022, one day before it made its closest approach with Earth. The potentially hazardous asteroid came within 2.5 million miles (4 million kilometers) of our planet, or 10.5 times the distance between the Earth and the Moon. Astronomers at NASA's Jet Propulsion Laboratory used the 230-foot (70-meter) radio antenna at the Deep Space Network's Goldstone Deep Space Communications Complex near Barstow, California, to precisely track the asteroid's motion and obtain detailed radar images.

1989 JA is a binary system, consisting of a large asteroid and a significantly smaller satellite asteroid that revolve around each other without touching. The larger asteroid is about 0.4 miles (700 meters) across and shows several topographic features as it rotates. The secondary asteroid, which was discovered this year, is between 100 and 200 meters in diameter and has an orbital period of about 17 hours.

1989 JA was discovered by Eleanor F. Helin at Palomar Observatory in Southern California on May 1, 1989. Follow-up radar observations that year did not reveal a satellite. In 2010, NASA's Wide-field Infrared Survey Explorer (WISE) was used to help determine the primary asteroid's size. This year, a few weeks before the asteroid's most recent close approach, astronomers at Ondrejov Observatory in the Czech Republic measured the asteroid's light curve (the change in reflected light intensity over time) and found hints of the satellite in orbit. The new Goldstone observations refined the size of 1989 JA and established that it is a binary system.

1989 JA does not currently pose an impact risk to Earth, but observations by planetary radar can help astronomers better understand its orbit around the Sun so that any future risk can be continually assessed.

More information about asteroids and near-Earth objects is available at http://www.jpl.nasa.gov/asteroidwatch.