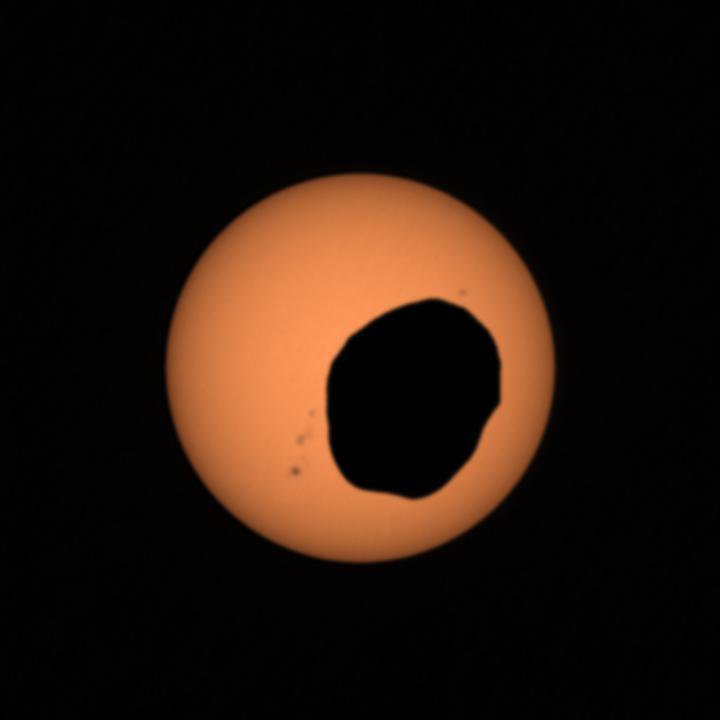 NASA's Perseverance Mars rover used its Mastcam-Z camera system to shoot video of Phobos, one of Mars' two moons, eclipsing the Sun. It's the most zoomed-in, highest-frame-rate observation of a Phobos solar eclipse ever taken from the Martian surface.

Several Mars rovers have observed Phobos crossing in front of the Sun over the past 18 years. Spirit and Opportunity made the first observations in 2004; Curiosity in 2019 was the first to record video of the event. Each time these eclipses are observed, they allow scientists to measure subtle shifts in Phobos' orbit over time. The moon's tidal forces pull on the deep interior crust and mantle of the Red Planet; studying how much Phobos shifts over time reveals something about how resistant the crust and mantle are, and thus what kinds of materials they're made of.

It's long been known that Phobos is drifting toward the Martian surface year by year; tens of millions of years from now, it is expected to crash into the planet or fragment into chunks that will impact the planet. Studying Phobos' orbit also allows scientists to refine predictions of when the doomed moon will crash into Mars.

NASA's Jet Propulsion Laboratory, which is managed for the agency by Caltech in Pasadena, California, built and manages operations of the Perseverance rover. Arizona State University in Tempe leads the operations of the Mastcam-Z instrument, working in collaboration with Malin Space Science Systems in San Diego, on the design, fabrication, testing, and operation of the cameras, and in collaboration with the Neils Bohr Institute of the University of Copenhagen on the design, fabrication, and testing of the calibration targets.