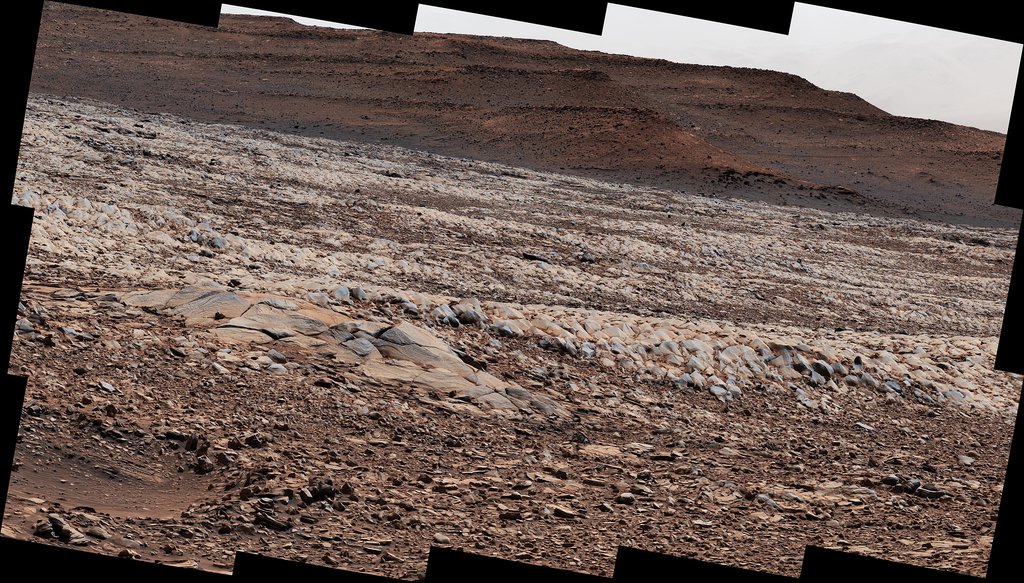 NASA's Curiosity Mars rover used its Mast Camera, or Mastcam, to survey these wind-sharpened rocks, called ventifacts, on March 15, 2022, the 3,415th Martian day, or sol, of the mission. The team has informally described these patches of ventifacts as "gator-back" rocks because of their scaly appearance.

Ventifacts chewed up Curiosity's wheels earlier in the mission. Since then, rover engineers have found ways to slow wheel wear, including a traction control algorithm. They also plan rover routes that avoid driving over such rocks, including these latest ventifacts, which are made of sandstone &ndsh the hardest type of rock Curiosity has encountered on Mars.

These rocks form the surface of the "Greenheugh Pediment," a broad, sloping plain in the foothills of Mount Sharp. The floor of Gale Crater is visible along the edges of the mosaic. When Curiosity's team saw the gator-back rocks, they ultimately decided to turn the rover around and take an alternative path to continue climbing Mount Sharp, a 3.4-mile-tall (5.5-kilometer-tall) mountain that Curiosity has been ascending since 2014. As it climbs, Curiosity is able to study different sedimentary layers shaped by water billions of years ago. These layers help scientists understand whether microscopic life could have survived in the ancient Martian environment.